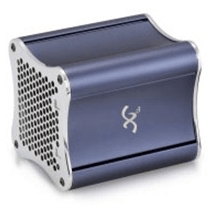 It wasn’t so long ago that the Steam Box seemed like an idyllic dream. But then, seemingly out of the blue, Valve CEO Gabe Newell revealed that the company would in fact be making one, and so would third-party companies. Yesterday at CES, Xi3 Corporation made good on the latter half of Newell’s announcement, unveiling a Steam-enabled box for use in the living room.

The “grapefruit-size” box—codenamed Piston— was developed to support Steam and its Big Picture mode, a relatively new service which optimizes Steam for televisions. We know very few specifics about the hardware at the moment, but Engadget has been able to confirm that it contains a quad-core AMD APU and can handle up to 1 TB of storage. The Piston’s appearance is also subject to change, as it’s still currently in the development phase. And seeing as how it’s still in development, it should come as no surprise that pricing hasn’t been revealed yet.

Additionally, it was revealed that Valve has made an investment in Xi3, although no details were disclosed.

Now, just to reiterate: this is not the Steam Box. Newell has stated that we’ll be seeing that later this year, and with all this talk about Valve speaking with hardware and content developers at CES, it wouldn’t surprise me if we saw more third parties release Steam-powered hardware this year (and the years ahead). Heck, just yesterday we were talking about Nvidia’s Project Shield, an Android-based device which lets people play their Steam games on a TV set.

With all these Android and Steam products showing up, you can’t help but wonder how Microsoft and Sony’s next consoles will fare when they release.

Indie Royale’s “Replay Bundle Vol. 1” is sure to give you deja vu