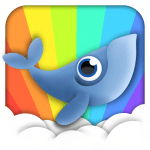 Whale Trail was, in a word, wonderful. Unfortunately the game didn’t sell anywhere near as well as it should have. As of right now, iOS gamers have paid for only 140,000 downloads of the game. That said, UK-based developer ustwo is casting the dice one last time in an attempt to prove that its premium game model can work.

According to Pocket Gamer, ustwo’s mills™ (who goes by the title “CHIEF WONKA”) stated he was disappointed with the sales numbers and they represent the “final nail in the ustwo premium coffin.”

mills™ stated “We had invested a lot of money making and marketing a game for the masses and it failed to reach the masses. Although we’re still getting around 500-700 downloads a day on iOS, we quite rightly feel it’s not enough for a game of such quality. So our conclusion is that we were wrong to go premium.”

ustwo is now releasing the game on Android Market with a price tag of $0.99. Whether or not the game succeeds with Android users (the studio is hoping for 45,000 downloads within the first few months) will prove if the premium model is actually feasible.

According to mills™, Whale Trail has cost £250,000 to develop for both iOS and Android. Hopefully, the game manages to take off on Android systems, and the developer is able to make its money back so that they can continue producing such top-notch quality titles.