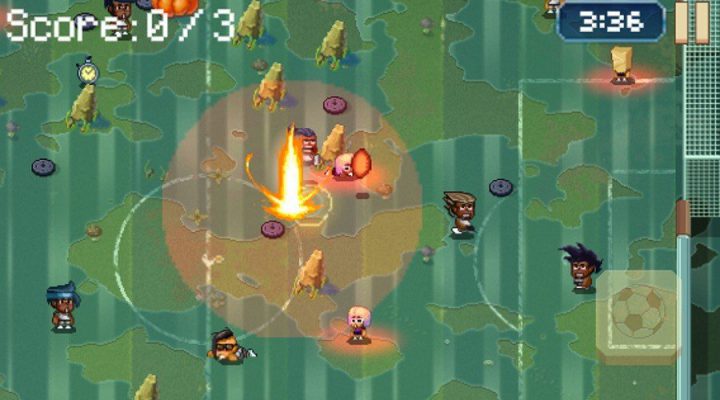 We already recommended a bevy of soccer games to keep you entertained during the very rare moments of World Cup downtime, but a new contender has hit Google Play and the App Store today. UpperCup Football is more arcade mash-up than sports simulation, but it scratches a certain Mutant League Football itch.

The game is divided into five-stage cups, with each stage requiring a certain number of goals for completion. What changes on each level are the obstacles and opponents you’ll face, including ball-bouncing land mines, sloggy water-logged fields, and extra-aggressive unicorn-headed opponents.

The controls are exceptionally simple, with a single tap sending the ball to the nearest teammate and a longer hold boosting a power meter for a cross-field kick. While defending, opponents can be tackled or the ball intercepted, but being too aggressive will earn you a red card—which doesn’t eject a player, but puts a blinding paper bag over his head.

Although gameplay is somewhat relaxed and turn-based—opponents won’t rush you until you’ve released the ball—things start to get crazier as more obstacles are introduced. We’re not sure why these players are forced to play on fields littered with pumpkins, stalagmites, and explosives, but it does make for interesting footballing as the (not always soccer) ball randomly careens all over the field and teammates are thrown offsides by random detonations.

The first 20 levels of UpperCup Football are free to try, with the 100-level, 3-difficulty “Cheaper Than A Beer” edition available for $2.99. [iOS, Google Play]