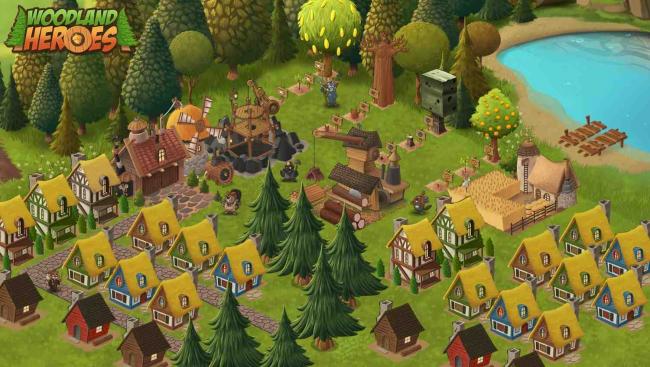 Woodland Heroes‘ unique take on turn-based strategy and charming world made it one of our favorite Facebook games of 2011, but the developers at Row Sham Bow aren’t done yet. Very soon players will get to enjoy a brand new feature in the game, with an upcoming expansion that adds city building to the formula.

In keeping with the game’s story, the new village area tasks you with rebuilding a village area that’s been destroyed by the evil bear army. At the beginning the place will be a complete mess: there’s debris everywhere, few functioning homes or buildings, and the bears have even set-up their flags. You’ll be clearing away this debris and replacing it with a beautiful forest village.

This includes adding homes that will earn you money, as well as other resource-producing objects such as trees, which will create wood for you to use. The expansion has rolled out to a small percentage of players already, and we’ve managed to play around with it for a little while. And while the city building doesn’t feel all that unique — many of the features are common amongst social games — it still feels like a natural extension of the game, especially since what you produce in the city can then be used to bloster your military might. The added variety doesn’t hurt either.

While only a few players have access to the expansion now, Row Sham Bow has told Gamezebo that the content will be available to everyone over the next few weeks. Stay tuned to Gamezebo for further news.

Zynga may be going after EA’s sports game market share

Apple, Zynga, listed as top trademark bullies of the year