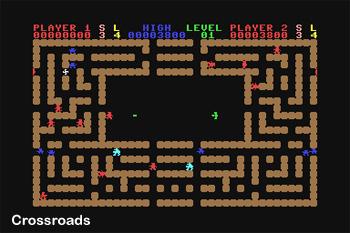 While big name developers are becoming a more and more steady presence on the App Store, every now and then an indie developer, coding out of their bedroom until the wee hours of the morning, can still manage to break through with a critically-acclaimed title. Thanks to the release of his retro-tinged maze game Forget-Me-Not back in March, Brandon Williamson has become one such developer.

We recently had a chance to speak with Brandon about everything from the origins of Forget-Me-Not to his feelings on other maze-based favourites like Pac-Man. Here’s what he had to say;

Forget-Me-Not takes the classic maze-clearing formula of Pac-Man and re-invents it with firepower, aggressive enemies, randomized levels and more. Tell us a little about how Forget-Me-Not came to be.

My process is fairly random. Forget-Me-Notstarted as an exercise in trying to make a simple game as quickly as possible, just for fun. I’ve always liked games set in mazes, and had been wanting to have a go at doing something with procedurally generated levels, so I started by making a random maze generator.Then I put in the player and a couple other types of creatures. The Pac-Man inspired flower-collecting mechanic was just a temporary thing at first, but I ended up liking how it looked having the mazes full of flowers.

Though some of it was of course inspired by Pac-Man, a bigger inspiration was the Commodore 64 game Crossroads which I loved as a kid. Crossroads had mazes full of tiny creatures wandering around eating each other – as well as the player – and shooting at everything. It had the feel that you were just one of many creatures living in a miniature ecosystem. I decided to make something like that. So then it was just a matter of adding whatever different kinds of enemies I came up with and making them interact.

The game still felt like it needed something else, so I put in the key and door. I wasn’t sure if they really added anything to the game at first, but then I made the key also be a shield and it was like, BAM! That’s it!

The game’s visuals had an authentically retro PC gaming feel to them, so much so that it reminded me of being a kid and playing on my Tandy 1000. What inspired you to design the art with such an old school feel?

Aside from that, I too loved the games I played as a kid. The aforementioned Crossroads had graphics made of customised text characters – so everything was on a grid, and everything was the same size.Something else I used to play a lot was ZZT, which had normal ASCII graphics, but used them in an action oriented, dynamic kinda way.

So I wanted to make something whose graphics felt like those of an ASCII game, while not being held to the same limitations. It’s nice being able to make things whizz about, rotating or changing size and colour. And, yeah, that style issimple enough for me to handle with my very limited art skills 🙂 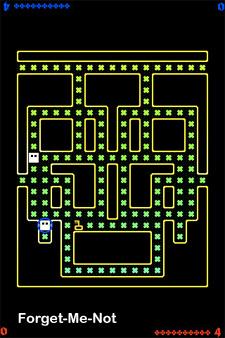 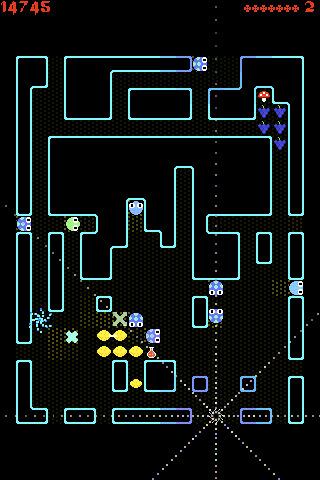 You’re not the only who’s taken the Pac-Man formula in bold new directions in recent years. Namco themselves have tried with a slew of releases from Pac-Man Vs. to Pac-Man Championship Edition, not to mention the dozens of spin-offs like Pac-Chomp and Pac-Man Pizza Parlor. How do you feel about the current state of the Pac-Man franchise?

The only new Pac-Man game I’ve played is Pac-Man CE, which I love. It has a beautiful look and feel to it, and makes Pac-Man fun (I never really got into the original). I haven’t had a go of CE DX yet, but I want to. I don’t really see Forget-Me-Not as being a re-invention of Pac-Man… it’s not as pure or elegant an arcade game.

All the spin-offs…well.. I can understand why they do it (lots of other big games companies do the same kind of stuff), but personally I think it’d be cooler if they’d make up new characters for most of those games. When it’s like, <insert mascot character here> is jammed into a completely unrelated game, it feels a bit cheap. Though if the game is actually fun or clever then it’s all okay! That’s more important.

Other retro games have seen re-inventions on the App Store in games like Space Invaders: Infinity Gene, Centipede Ultra, and more.What do you think keeps gamers coming back to these classic arcade formulas?

They’re simply fun to play. Things whooshing around and exploding (especially exploding into showers of fruit, obviously) is satisfying. Their quick nature definitely suit platforms like iOS, where you can pull your phone out for a 2 minute game while waiting for the bus or whatever. Also they’re a bit abstract, rather than trying to look or behave like the real world. I think that makes them hold up well, graphically (or at least better than say, most early PS1 games). Also, nostalgia.

Have you had a chance to check out any of the App Store’s other Pac-inspired maze games? What do you think of them? EVAC and Treasure Grab both stand out as particularly notable releases in my opinion. 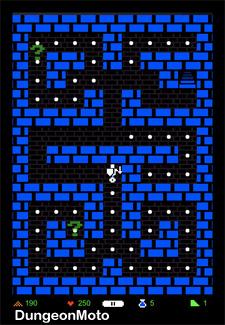 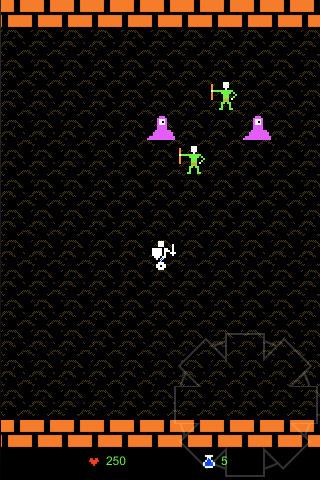 I haven’t played either of those but I’ll check ’em out! EVAC looks very shiny indeed. One game I did play was DungeonMoto, an interesting little game which also combines Pac-Man with roguelike-ish gameplay (actually maybe it’s more like Pac-Man meets Archon), though in a very different way to Forget-Me-Not – moving around collecting pellets is in real time, but battles are turn-based. I like DungeonMoto a lot, especially the graphics and atmosphere, but it’s a slow game to play – definitely a much more contemplative kind of thing. I just wish it had random mazes!

If your phone rang tomorrow and it was Namco with a job offer, what would you say?

Haha, I’d say “..is this you again Bob? I TOLD YOU NOT TO CALL ME”. Really, I have no idea. It would be weird. 🙂 I don’t think I’m cut out for a job in a proper games company… they probably don’t let you code in bed.

What’s next for Brandon Williamson? Any plans to re-invent another arcade classic?

I have lots of little game ideas, but nothing specific planned for next up. I’ll start tinkering when the mood strikes and see what happens :)None of my current ideas is based on any particular classic game but they do all have collectible fruits. There are far too many games I want to make… puzzlers, tactical RPGs, weird driving games… most likely I’ll end up making something shooty though, I think that’s where my heart is.