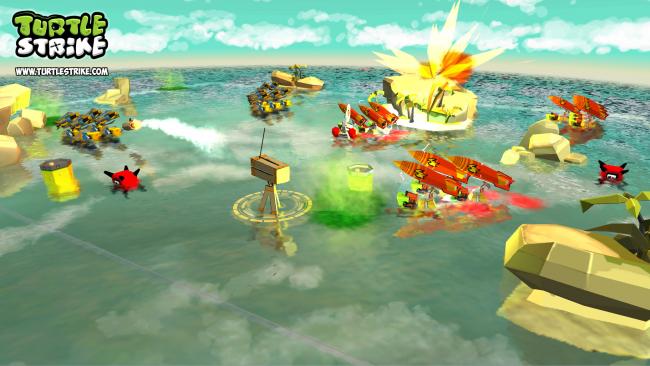 In TurtleStrike, an upcoming free-to-play multiplayer strategy game from eeGon Games, players will get to see just how destructive these turtles can be, firsthand. The game adopts a turn-based style of gameplay, with a fast-paced action component as you prepare to defend and move on the offensive before your opponent knows what hit them! I recently had a chance to play an early preview build of TurtleStrike before the game’s full commercial release, and I can definitely back up the assertions that this world-wide turtle war will house a deep and intricate manner of gameplay, where different risks and strategies must all be calculated unless you don’t want to wind up as a steaming bowl of turtle soup!

In each timed planning stage, you’ll have the option between moving your turtles into more strategic positions, firing a short ranged missile, or launching a guided torpedo around islands and other obstacles in the water to mark your enemy target. The latter torpedo mechanic was definitely a highlight of my hands-on experience with the game, as these fearless turtles will actually ride them across the water in a near-suicidal, full-frontal attack! Everything in the game is controlled with smooth touch-and-drag gestures, and the bright and boxy visuals are especially nice to look at.

In each round, both you and your opponent start out with 10 turtles, and the objective is to wipe out all enemy turtles in whatever way you see fit. The catch is that your turtles will need to be grouped together in clusters of 3 on the battlefield, which lets you experiment with different turtle formations for the optimal tactical approach. But my favorite part of the game so far is how you can customize the looks of your turtle cadets, because who wants to fight with the same old green slow-pokes when you can command dastardly zombie turtles or scaly dragon turtles instead?! 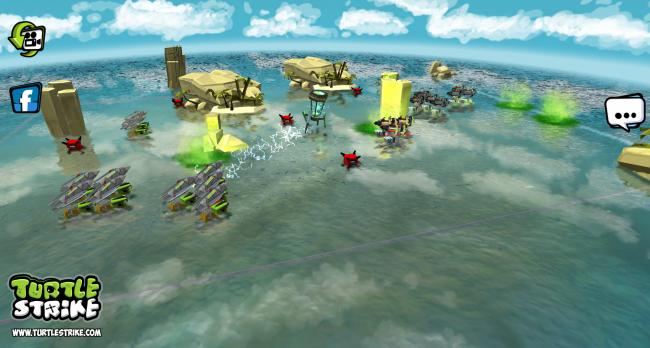 Now I’ve already mentioned how turtle shells are extremely tough, and so the turtles in this game can not only wield powerful rocket launchers on their backs, but an entire arsenal of dastardly weapons as well, including giant crossbows and boulder-flinging catapults. TurtleStrike is planned for a release in late July on iOS and Android devices, and future updates will provide new turtle skins, different environments to battle in, and of course, tons of new weapons to mount on your turtles.