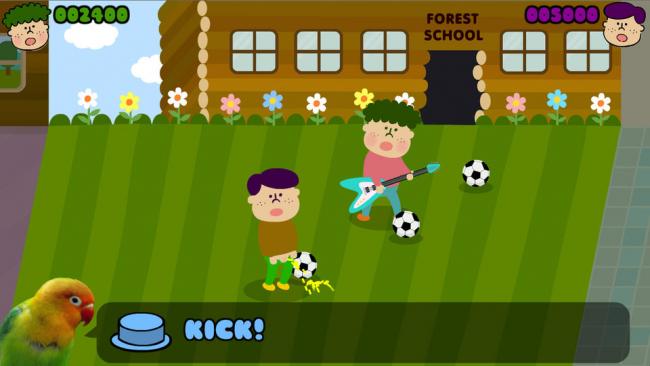 Few developers are capable of tripping players out like Keita Takahashi. Best known as the maestro behind the Katamari series and the equally weird Noby Noby Boy, he has a knack for designing kooky, charming, and occasionally downright crazy games. Tenya Wanya Teens, one of his latest, follows in those footsteps quite nicely, and in fact might be his oddest release yet.

Tenya Wanya Teens is a game about the awkwardness of our teenage years. Players are ushered from location to location and tasked with helping their characters perform seemingly simple tasks like brushing their teeth and kicking soccer balls. The real challenge—and also the fun—comes from the controller, which features 16 buttons as well as a joystick. In order to perform the appropriate action, players must tap the button of the correct color. The colors of the buttons frequently change, though, forcing you to constantly look down as well as occasionally memorize which color performs which action. Pair all that with the fact that you’re competing against another player to attain the highest score, and you have one delightfully chaotic game on your hands.

The game was built with a party environment in mind, and so each round only takes about five minutes. But there’s a lot packed into those few minutes, such as salmon catching, urinating, showering, and guitar playing. At first, you only have to perform these actions one at a time. Later on in the round, you’re forced to rid single screens filled with soccer balls, bathroom stalls, girls, and more by performing the appropriate actions with them. If you think this sounds similar to WarioWare, you wouldn’t be entirely wrong.

Doing well in the game is extremely satisfying, but messing up can be equally enjoyable. At one point, when I was supposed to approach a girl and express my love to her, I accidentally ended up peeing by her instead. It was one of the funniest things I’ve seen in a game, even if it gave my opponent enough time to confess his love to her and get more points.

Takahashi isn’t certain as to whether the game will receive a full release, or what platforms it will come out on if it does. Our money is on mobile and PC given the amount of buttons required to properly play. In any case, the game will be playable at a forthcoming Juegos Rancheros event in Austin, Texas. If you happen to be in the area, it’s well worth your time to stop by and give it a try.