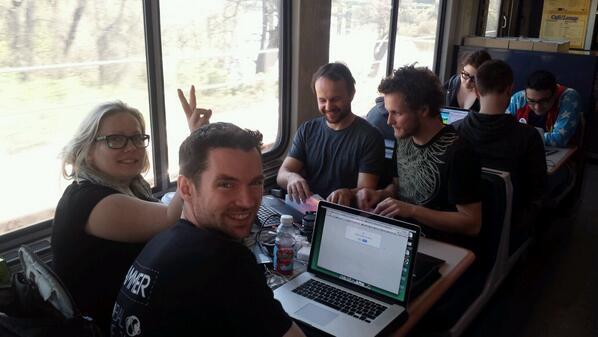 Game jams have become an increasingly popular way of helping developers connect, both to one another and back to their passions. It’s interesting, then, that the first-ever Train Jam, a 52-hour game jam set entirely on a train from Chicago to San Francisco, their final destination GDC, was themed as “disconnection.”

Like any jam, the idea is to conceive, conceptualize and create a game in the allotted time based on the preconceived theme. Gamasutra’s editor-in-chief, Kris Graft, ran a lovely trio of features on what sounds like just the first of many successful Train Jams and the games that resulted.

Zoe Quinn, creator of the game Depression Quest, worked on a project about maintaining social connections while running the indie game convention circuit. Rami Ismail, one half of Vlambeer, the company behind Ridiculous Fishing, Super Crate Box and Luftrausers, was there as well. He made an Android game requiring him to physically fend off players from tapping an onscreen “D” (for Disconnect, the name of the game as well as the theme) on a tablet strapped to his back.

Adriel Wallick, who started the whole crazy endeavor, makes it clear on the Jam’s website that there’s more to come in 2015.

Most of the games that resulted are playable on PC, Mac or the web, but others (like Ismail’s Disconnect) can be played on Android. One of them even runs on Oculus Rift, for all you early adopters out there.

Considering how many all-star indie games got their start at game jams, you should probably get on the trolley. This might be your first chance to see the next, great, award-winning indie game before the rest of the world. Be sure to check them out at trainjam.com.

Keiji Inafune on Japan’s struggle to be relevant in games again, and what it has to do with indie