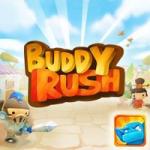 Buddy Rush is one our favorite RPGs so far this year—in fact, we’re still playing it two months after writing up our review. And thankfully the updates keep coming. The game’s latest update introduces a pair of new characters and difficult new mode for experienced players.

The two new characters that you can bring along into battle are Skully—a pistol-wielding female pirate—and Toxy, who uses poison-tipped daggers to take down the baddies. There’s also an all new mode called “raid,” which ups the difficulty quite a bit. In fact, some of the regular enemies in this mode are harder than the bosses available thus far. But with greater challenge comes greater reward, so expect some nice bonuses for beating levels in raid mode.

The level cap has also been raised, and is now at 72, and multiple new costumes and items are available. There’s also a brand new, tropical-themed chapter to explore called Kanbucay. Check out the trailer below to see the new content in action.