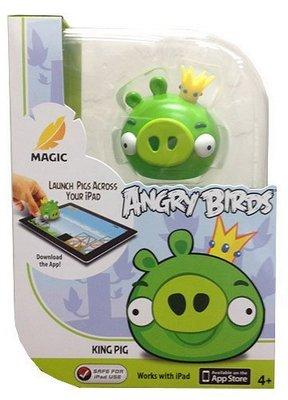 I make a lot of noise about having grown up with great video games like Myst and Super Mario World, or about the way my dad’s old Game & Watch system stoked my fascination for interactive worlds. In truth, however, my first – and seminal – play experiences were with real toys. Pitting my Toy Story figurines against my Small Soldiers warriors in a made-up conquests for the fate of a made-up empire.

That’s why I find the recent forging of a relationship between digital and physical games and toys to be so exciting. As the former takes over the entertainment space, I see such great value in encouraging kids to interact with the latter; to use their own imaginations to create worlds just as much as worlds are created for them by video games. In turn, the link to an already existing mythos, story, or theme enriches the way they feel about the toys they play with.

Case in point: Mattel’s latest line of Angry Birds-themed toys, dubbed “Angry Birds Magic.” Part of the company’s Apptivity series of toys that are pushing cross-play between real world objects and Apple’s iPad, the first entry available to the public is the King Pig. In of itself, the toy is a typical Angry Birds villain armed with a goofy expression and a crown, but when placed on an iPad running Rovio’s game? It unlocks four new modes!

The titular King Pig mode pulls a classic role reversal and turns pigs into eggs and birds into pigs, allowing the snorting evildoers to wreak havoc the other way around; Material Mix Up reverts to the original style of play but changes the look of the structures in which the pigs are sitting; Bird Frenzy gives you a refreshingly unlimited amount of avian armymen and a small amount of time to launch them; finally, Total Destruction is the most “hybrid” mode of the bunch, asking players to swipe the King Pig toy across the screen to destroy mini-structures as fast as they can.

At first glance, this may seem like a lot of exclusive content and power to bestow on one Mattel toy, but according to the company’s official spokespeople, Angry Birds products have ‘wildly’ outpaced early sales expectations. This latest Swiss Army knife of a pig seems like a smart way to continue pushing the boundaries of what toy owners (and gamers) have seen, reducing the risk of stagnating sales or of the toys falling out of favor.

What about you? Do you agree with Mattel’s UK head Geoff Walker that this is “going to be massive” for fans of the series? Do you think the growing link between physical and digital toys is a good thing, or encourages too much digital play? And for those who have kids, is this something they’d use? Let us know in the comments!

Final Fantasy Dimensions to cost $28.99 on iOS and Android