Home / News / To the moon and beyond: Moonbase Alpha 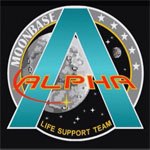 Ars Technica has an interview with the creative team behind Moonbase Alpha, a NASA-funded adventure game recently released for free on Steam. The game was created to raise interest in the space program through gaming, and was designed as a proof of concept for a much more ambitious project: a massively-multiplayer online (MMO) game called Astronaut: Moon, Mars and Beyond. Read the full interview with project manager Daniel Laughlin here.