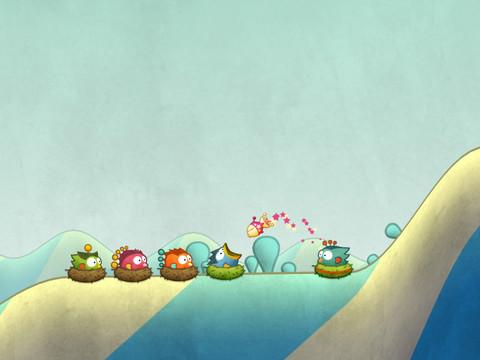 On one hand, Andreas Illiger has put us in a tough position. By promising the world “Tiny Wings 2,” and instead delivering an update to his original, high-flying smash hit, he’s cut us off at the pass where a review is concerned. You see, we tend play and rate a game only if it’s an entirely new beast, so to speak. On the other hand, however? We just got more Tiny Wings! That’s awesome.

As of today, players of the original (to be perfectly clear, this should be all of you) can head to the updates section of the device’s App Store and download Tiny Wings 2.0, completely free of charge. What do you get for a hefty price tag like that? As it turns out, a lot. Foremost, the game has caught up with the times, including iCloud save support and snazzy new Retina Display, the latter of which truly makes a difference. You may have seen it used as a buzzword elsewhere, but in a game as already simple and elegant as this, every dotingly crafted hill and moment stands out more vibrantly than before.

The centrepiece of the update, however, is easily the game’s new “Flight School” mode. Giving you access to 15 bite-sized zones, flight school has you competing as one of four baby AI birds to slide your way to the nest first, where the game’s classic aqua avian awaits; the mama, as it turns out! Here again, Illiger’s genuine love for this universe and his fans shines through, with each level feeling and playing starkly different from the other, and add depth to the classic formula using bouncy flowers and dreaded pools of barely-surfable water.

The result is a side-mode that feels like the perfect training ground for the title’s iconic endless run from the moon. From the get-go, the difference between first and last place is often one or two botched slides or poorly timed dips into water. I found myself diving back into the main mode (now dubbed “Day Trip”) and soaring more effortlessly than before, ever conscious of the feeling that three other birds were out to steal my dinner. Also, I was sleeping on the streets at the time, so that helped the gritty realism. Fine, that’s a lie.

And speaking of lies, I suppose I told a little white one when I said there Tiny Wings 2.o was just an update. As of today, iPad owners everywhere no longer have to go through one of the first world’s most pressing problems: seeing their soaring bird stretched to fuzziness on their 9-inch screen. For 2.99, players can pick up Tiny Wings HD – an iPad only version of the game. Besides the stable of stellar tweaks above, Illiger has added “Hill Party” to the iPad build: a two-mode multiplayer which lets die-hard tiny wingers (wingians?) compete on the same iPad to earn 10,000 points first, or amass the most points over the course of five islands. 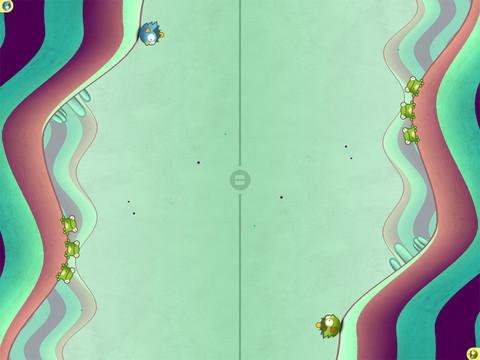 Generally, it’s not polite for a writer to demean his audience, but I’ll go out on a limb specifically to say this: if your first thought after reading that last paragraph was, “really!? Two more dollars just to get the game on iPad?” then you need to give me your address so I can come revoke your device. This is the kind of game that somehow makes you genuinely happy as you play, and for that, I’d argue Illiger more than deserves our hard earned couple bucks.

Besides, he’s the kind of developer who says on his iTunes description of the update: “Hello shiny Retina Display! Tiny Wings is now as lovely as you are.” No, Andreas. It’s you who’s lovely. Thanks for all the joy.

Hold on to your wallets! The Steam Summer Sale is here