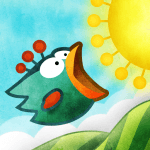 It wasn’t long ago that indie developer and Tiny Wings mastermind Andreas Illiger declared via twitter that we shouln’t expect any new content from him any time soon. The one man band who had stayed quiet for much of his game’s rise to fame seemed destined to stay quiet for much longer. Or was he? Just two days later, Illiger clarified his earlier tweet, saying “there will be no new game by me any time soon. But there will be something new from me…” What could he be talking about? As it turns out…Tiny Wings 2!

Illiger, it seems, has a penchant for playfulness. Following his cryptic set of tweets, the developer sent out a blank white picture, which many soon discerned hid a picture of a cracked egg (hint: highlight and tilt your screen to see it amid the white!). Immediately, speculation began to run rampant. One Twitter user pondered openly, “iPad version? New content? It’s a great game, and it deserves much more time in the sun.”

It looks like Illiger finally agrees. After more than a year of praise and fan demand for anything Tiny Wings, the self-described “human who likes to be creative” tweeted out an exciting, “three…two…one…” before unleashing a Youtube link and declaring, “finally, it’s coming: Tiny Wings 2…” What awaited behind the link, while not game footage, was perhaps better. Okay, it was absolutely better!

Illiger put together a dotingly crafted landscape from TIny Wings in the form of a long strip of paper punctuated by holes, which he proceeds to wind through a music box that hums a dainty variation of the original, iconic Tiny Wings theme, giving us what may be our first listen at the sequel’s tunes. The whole while, he guides the game’s adorable bird – replicated in paper – across the crayon hills attacked to a small stick, where he finally bumps into… you guessed it! Another egg.

Cut to: “The new Tiny Wings. July 12, 2012 on iOS.” People! That’s six days. six days! Talk about your unexpected gifts. Well… there’s not much more I can say besides: brace yourself. Play some TIny Wings to prepare. Watch this trailer about a hundred times. And we’ll keep you posted on everything Tiny Wings 2.