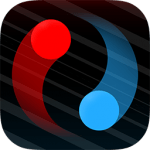 From Kumobius, creator of the fantastic Time Surfer and Bean’s Quest, comes a mesmerizing new action game called Duet. Described as a “hex-like” game of sorts that achieves an elegant presentation through a sleek minimalist design, Duet tasks players with maneuvering two different colored orbs through an increasingly difficult maze of falling objects. The orbs are linked together in a small circular orbit, and players simply have to rotate the chain to the left or the right in order to dodge the blocky and rectangular obstacles that get in their way.

Primarily a game about reflexes, and how fast you can get yours to react, just from watching the debut gameplay trailer of Duet in action, I can already tell that this one is going to join the ranks of games like Super Hexagon in providing an insanely challenging and “twitchy” experience: and I, for one, am totally all for that. With over 50 edge-of-your-seat stages, an endless Survival mode that you can use to brag to your friends, and a mystifying narrative that slowly begins to unfold, Duet is already shaping up to be a deep and engrossing mobile experience that is surely not to be missed.

But the coolest thing we’ve seen about the game so far is that every time you make a mistake in Duet, the orbs will splatter red and blue paint on the pristine white obstacles: to serve as a constant reminder of where you went wrong. Duet is currently expected to launch on iOS devices sometime in Q4 2013.

Free Games and Sales: Lili, God of Blades and more!