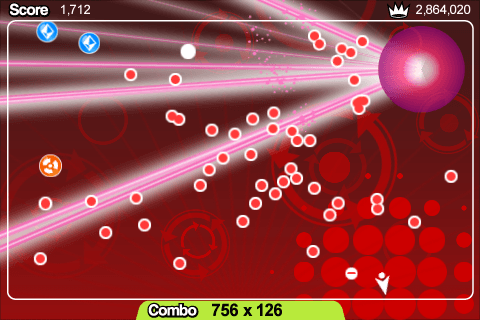 Crazy, challenging, and addictive, Tilt to Live is easily one of the best iPhone games we’ve seen in 2010 – and thanks to a recent update it just got a whole lot better. The much-anticipated version 1.2 has landed on the App Store, bringing a handful of minor tweaks and introducing two new game modes that offer up a solid blend of the familiar and the new.

Code Red will tackle the familiar, in an experience the developers refer to as “classic mode on crack.” Rather than a slow build in difficulty, Code Red will start at the game’s most challenging point and task players to survive from there.

Gauntlet puts a new spin on Tilt to Live, offering up something surprisingly more akin to a platformer. Rather than following you, the deadly dots will work together to form deadly traps that will scroll across the screen.

New modes aren’t the only thing 1.2 has brought to the table. The update also includes 6 new awards and a fix for game crashes on devices with certain international region format settings.

If you’re a fan of Tilt to Live, you’ll be happy to hear this isn’t the only update in the works. A teaser on the game’s iTunes page indicates that we can expect more weapons, more game modes, and possibly iPad support in the future.