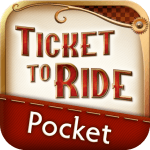 We’ve made no secret of our love of board games on mobile devices here at Gamezebo, and Ticket to Ride? It’s one of the absolute best. At least, the iPad version is. The iPhone build, better known as Ticket to Ride Pocket, seemed to be missing a little too much from its big brother to be held in quite as high esteem. At least – it did until now. Days of Wonder have just announced that thanks to the game’s latest update, Ticket to Ride Pocket finally has online multiplayer – and it’s even better than you might expect.

Unlike the iPad version of Ticket to Ride, which feature a real-time experience built on the back of the Ticket to Ride Online network, Ticket to Ride Pocket‘s multiplayer is asynchronous. So now, like Scramble With Friends, Hero Academy, and Carcassonne, Ticket to Ride fanatics can have multiple games on the go and will receive a push notification when it’s their turn.

“This is the update Ticket to Ride players have been clamoring for since we released Ticket to Ride Pocket.” Said Eric Hautemont, Days of Wonder Founder and CEO. “We love online gameplay, but faced a challenge: ‘how do you create a great online experience on a device like the phone that is constantly being used for other functions?’ We needed to build an experience where players could come and go as they please yet have something meaningful to do when they played; the thought of having multiple games going at once was what convinced us this could work. With Multi Mode, we’ve given players what they want without compromising on the gameplay that made Ticket to Ride so popular to begin with.”

Players will be able to play asynchronously with up to four online friends in each game, making this a proper 5-person Ticket to Ride multiplayer experience.

There’s still no word on our other complaint with Pocket: the lack of additional maps through in-app purchases. We’re going to keep holding out hope, but even if these never make an appearance, we’re pretty sure that push-enabled multiplayer on the original USA map will be more than enough to destroy our productivity forever. I just hope I can put it down long enough to open up the new Ticket to Ride: India that just arrived at my doorstep this morning.

The Sims FreePlay is coming to Android

Zynga accounts for 12% of Facebook’s revenue