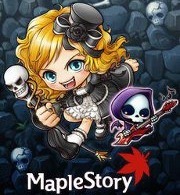 Nexon’s massively popular browser MMO MapleStory is getting yet another big update. Dubbed “Legends,” the upcoming content pack brings with it three impressive looking new characters to play as.

As revealed by MMORPG.com, the three characters include the cannoneer (which wields a massive cannon as a weapon), Mercedes (who can duel wield crossbows in battle), and the demon slayer (who can fly about the game with bat-like wings). Few details have been revealed about the characters but you can watch them in action in the teaser trailer below.

“Legends” follows the “Ascension” update released this past September, which brought with it revamped versions of the warrior, magician, and archer characters, as well as all-new party quests.

Nexon has yet to announce when the new update will be available for MapleStory.