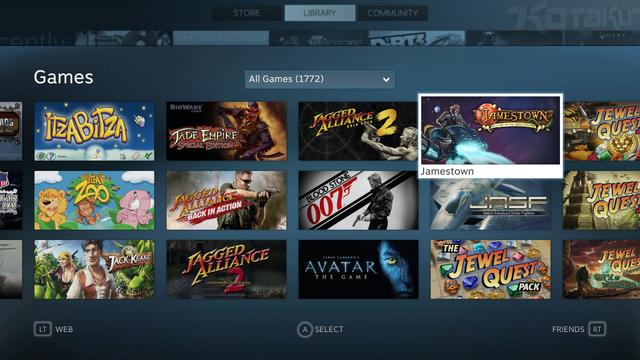 One small shift for Valve, one big picture for gamers. The download giant announced today that they’re taking Steam into the living room with the introduction of Steam Big Picture: a major update to the gaming platform that tweaks it visually and functionally for your TV. Oh yeah… this is huge. Say goodbye to the days of sitting, hunched over your computer, playing PC games all day, and hello to the days of…sitting, hunched in front of your TV…playing PC games all day.

In all seriousness though, this is certainly something to get excited about. Big Picture mode is set to be an interface which allows for a one-click conversion of your standard Steam display into a “full screen user interface optimized for readability and interaction on TV.” It’s the same Steam, redesigned for use and play with both a traditional game controller and keyboard/mouse combo. By hooking up your rig to a TV, you’ll get access to Steam’s store, community, and your personal library of games, cloud files, and workshop content, all wrapped within a big-screen-friendly interface.

Notable differences and additions include menus tweaked to take advantage of a larger screen, which seem to be reorganized to flow better when controlled with a joystick. A joystick which will be essential in Valve’s new “Daisywheel” typing system, which implicitly calls out modern consoles on their continued dependance upon QWERTY keyboard interfaces. Shaped like a lot flower, Daisywheel allows you to flick your joystick in any direction either straight or diagonal, for easy access to a phone-like selection of four letters which can be chosen with one of the four action buttons (ex. A, B, X, Y). While we haven’t yet went hands-on with Big PIcture, Kotaku describes the experience as “intuitive and quick,” noting the ability to write full sentences at a crisp pace “seconds after pickup up the controller.”

In addition to rethinking the typing experience of TV gaming, Valve is hoping to make strides where the browser is concerned, equipping Big Picture with the “first first-person internet browser,” which in practicality translates to a controller-driven web. Zooming in, clicking from place to place, and exploring content will all be “reticle-based:” driven by using a more precise circular cross-hair of sorts. So, for all of the company’s attempts to rethink the way players game on their TV, does this signal the move towards the long-fabled “Steam Box” console from Valve?

In all probability, not anytime soon. In fact, as Ben Kuchera pointed out in his analysis of Big Picture on the Penny Arcade Report, the service is more aptly Valve placing its toes in the waters of moving their service to your living room. They haven’t made the prospect particularly ergonomically friendly for those whose computer stations rest away from the TV, and adoption will likely be limited at first to the highly dedicated PC crowd, or those excited by the concept’s novelty. The end of consoles, this is most certainly not. In fact, I’d be reticent to even call it the beginning of the end. Steam’s move to TVs is most definitely a progressive step in removing the barriers separating your gaming experiences, but – like the name says – will surely prove to be a small move in a much bigger picture.