Home / News / Therian Saga is on the web, but don’t call it a web game

Therian Saga is on the web, but don’t call it a web game

Early on in my conversation with Virtys’ Laurent Devigne at PAX East, I find myself explaining why I haven’t tried his studio’s free-to-play MMORPG Therian Saga yet. I just haven’t had the time, I say, because even though it looks really intriguing, it seems so complex for …

It’s true, and it’s unavoidable. If there’s still a little skepticism among a segment of the gaming community toward free-to-play games in general, there’s even more for those that come to life within your browser. Virtys would prefer you not paint its game with too broad a brush.

“We don’t want to be compared to a Facebook game,” Devigne said. “We’re web-based because we want people to enjoy it without installing 20 gigs.”

That’s perfectly logical reasoning, but then everything about Therian Saga follows a sensible path. Originally dreamt up by a small group of French-speaking developers, it found a solid audience of about 40,000 to 50,000 players upon release in France and Quebec (as Fatecraft: The Therian Saga).

The English language market beckoned, but there was work to do first. Because so much of the game is descriptions and dialogue, there was a lot of translation to be done. Outside help was enlisted from Canada and the US.

Currently, the game is in open beta, whatever that distinction means for a F2P MMO. You can play it now at TherianSaga.com in its entirety, as none of the content is behind any kind of paywall.

Instead, players can pay to have more control over time, which is an important element in Therian Saga. The asynchronous portion of the gameplay involves traveling, exploration and skill improvement, all things that can be set to happen while you’re not online.

Virtys borrowed the last of those concepts from a very popular but very different MMO you probably know.

Also inspired by EVE is premium currency, Crowns, that can be purchased for regular currency using the in-game auction house. With enough dedication, a player can simply grind out enough gold to buy Crowns and never have to pay for them again, at least in theory.

I get the distinct impression that no one at Virtys is getting rich under that system.

“For who, for us or the players?” Devigne said when asked if it was effective, laughing again. “Honestly, it’s working well for us. We’re not making millions, but it’s working.”

One thing Therian Saga has that rivals anything found in a full-priced MMO is a detailed crafting system. It actually predates every other part of the game, and it’s not hard to see why. There are eight trades and a few dozen skills, all of which work together in a very organic fashion. You might need one to gather raw materials, another to refine them and a third to turn them into components. It’s fair to say the MMO aspect of the game comes into play most heavily here, because creating powerful items is going to take knowledge from several fields that one character is unlikely to have. 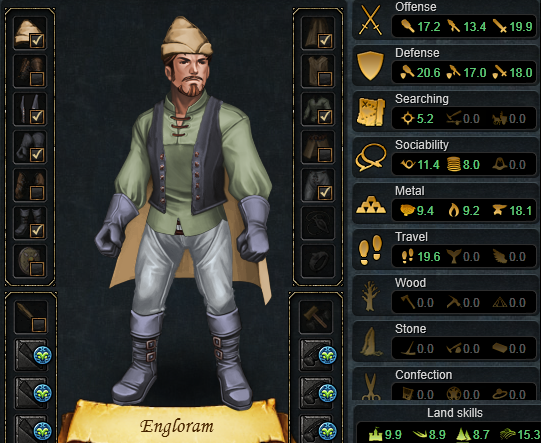 That’s not to say that you couldn’t train every skill to super high levels, just that it would take approximately now until forever to do so. Bartering with other players seems like a much more practical option. However you acquire them, materials can be combined in all kinds of ways to produce very specific bonuses and traits for gear.

In other words, the crafting is impressive, which is exactly how the developers planned it.

“We wanted to have two things in our crafting system: a lot of synergy between the professions or skills, and a lot of options for the items,” Devigne said. “We’re very proud of our system. We think that it’s very deep, very complex.”

Devigne guides me through a dungeon, where the gameplay almost resembles a board game. His character and companions advance through it step by step, each room getting its own text box like it was being described by an especially creative Dungeon Master. There are locks to pick and monsters to fight, and while the turn-based combat isn’t a big focus, it at least adds another dimension to the proceedings.

All of the dungeons and the gorgeous world map are hand-drawn, giving everything a high class look. Interestingly, the game runs on Microsoft Silverlight, so it can be played on PCs or Macs (but not iPads, sadly).

It’s just hard to fully appreciate it in the crowded Indie MegaBooth, crammed in with so many other stations showcasing games that can be easily digested in a few minutes. Virtys’ is the antithesis of many of its PAX East neighbors, but still might need similar help to get noticed by a wider audience.

Asked to try summing the game up, Devigne gives a simple but confident reply.

Just remember that it’s on the web but it’s not a “web game.” For Therian Saga, that’s a small but important distinction.

Mobile exclusives are the next big thing, says WSJ