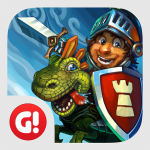 Love The Tribez, but wish you had more of it? Consider your wish granted. Game Insight has just announced The Tribez & Castlez, the first spin-off from The Tribez which will send Aurora and the Professor to another world full of magic and medieval wonder in early 2014.

The game will still embrace The Tribez city-building ways, but with a fantasy theme rather than a prehistoric one. Dinosaurs are all well and good, but you can expect both dungeons and dragons this time around. And that’s not all – Game Insight has told us that players can expect everything from werewolves to Trollums (which I’m assuming is Tribez-speak for trolls OR a delicious nougat-filled candy).

No specific release date has been confirmed yet, but when The Tribez & Castlez does come out you can expect to play it on iOS, Android and Facebook.