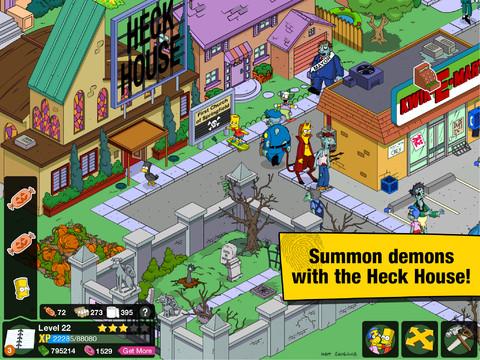 In the quarter-century that The Simpsons have been on television, some of their finest moments have taken place on the “Treehouse of Horror”—an annual Simpsons-esque parody of horror movies, urban legends, Twilight Zone episodes, and other bits of “2spooky” pop culture.

2012’s witching hour is drawing near, and so is this year’s Treehouse of Horror TV episode — though Simpsons fans can expect an additional treat in their candy sacks too: EA’s mobile/social hit The Simpsons: Tapped Out recently updated with a Halloween theme to coincide with the airing of Treehouse of Horror XXIII.

The Halloween update for Tapped Out is more than a simple visual upgrade. Players can also gather artifacts that will help them embark on a quest and answer a trivia question about Treehouse of Horror XIII, which airs this Sunday.

Granted, it’s still the Halloween visuals that make the update so much fun—especially for old school fans. Keep an eye out for zombified Springfield citizens, build the Pet Cemetery, and mourn for Lenore with Raven-Bart from the very first Treehouse of Horror. Then suck in your gut and ask yourself if you have the courage to brave the ghouls lurking inside of Reverend Lovejoy’s Heck House.

The Simpsons: Tapped Out is free to play, so start making some yellow-fleshed zombies.

How Zynga can get its groove back