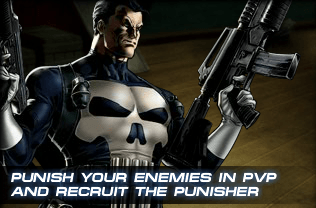 They say a superhero game is only as good as its characters, and if we’re going by that measure, Marvel: Avengers Alliance is a great game that just keeps getting better.  Why?  Because of the constant onslaught of new heroes!

The latest to join the ranks is Frank Castle, aka The Punisher.  Starting today, players can compete in season 4 of the Avengers Alliance PVP tournament, and those who manage to take top marks will be rewarded with The Punisher when the tournament ends in 25 days.

‘Top marks’ is the operative term.  You’ll need to be in the top 0.5% of all PVP players and have initiated at least 100 matches.  It’s a daunting task, and I’m speaking from personal experience.  I’ve tried and failed in the three previous PVP tournaments, but I’ll be damned if I’m not trying again in number four.

If you manage to fail (as I always do), don’t worry – you’ll still be rewarded handsomely at the end of the tournament with a variety of prizes depending on where your rank falls. And if history proves anything, you should be able to buy The Punisher from the in-game store when PVP Season 6 starts.

Speaking of which, that means PVP Season 2 prize Cable is now available for purchase!  If you’ll excuse me, I have some command points I need to spend.