Home / News / The past, present, and future of Fieldrunners

The past, present, and future of Fieldrunners 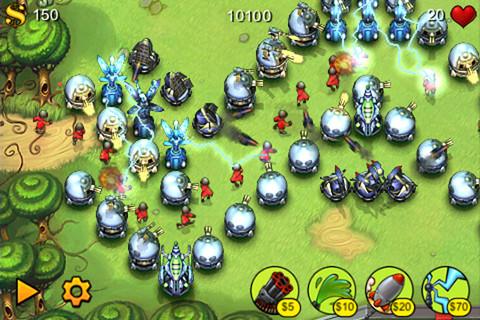 When the App Store first launched in 2008, few people realized what a cultural phenomenon iPhone gaming would become.  Developing a game for the device was risky business back then, but it was a business Subatomic Studios wanted to be in.  And it worked.  Their tower defense game Fieldrunners was the first real notable hit on the App Store.

Now, nearly four years later, the team is preparing the sequel for launch – and the App Store is a very different scene.  We recently had a chance to pick the brains of Subatomic’s CEO Jamie Gotch and designer Chris Canfield to find out what an early win on the iPhone was like, how the Fieldrunners brand has grown, and what we can expect in the sequel.

Fieldrunners was one of the first real hits on the iPhone.  Tell us a bit about what early App Store success was like.

Honestly, the early days were a bit of a blur.  We were adding tons of new features.  Phones kept updating.  We were constantly introducing new people to the game.  It is remarkable how much success still resembles making a videogame out of your dining room!
There is a tremendous amount of effort that goes into every game before launch.  But once we launched, we had more work to do than any of us expected, and just the three of us to do it with.  None of us wanted to let down our new fans!

Is the App Store a different place now than it was in 2008?

The App Store is a very different place than it was when we launched the original Fieldrunners.  Nobody knew if selling apps was going to be a success or not.  Remember: At the time in the U.S., phone-gaming was seen as the free-toy-in-a-box-of-cereal.  Nokia’s Snake was widely known, but few people were buying or playing phone games.  It just wasn’t on most people’s radars.
Now, phones are the “next big platform.”  Budgets have ballooned to millions of dollars, with major corporations trying to establish themselves in the space.  Similarly, when college students make their first videogame, they put it on the App Store.  This gives a tremendous amount of options to players, but it can be very difficult for new teams to get noticed.  For every successful Bubble Ball, there are a hundred Serious Sam Kamikaze Attacks that couldn’t get noticed.

With so little iOS competition back in 2008, how much do you feel “right place/right time” played a factor in Fieldrunners initial success?

There is a lot we did with Fieldrunners that we couldn’t get away with today.  When we first shipped, we had one level, one mode, four towers, no achievements, and no sound.  What we had was solid, finely tuned gameplay and gorgeous artwork.  Over the course of the next 2 years, we built out the game that people think of as Fieldrunners.  The game grew up in conjunction with the iPhone gaming community growing.
This meant that our little team of 3 had the opportunity to create a game that was played by millions.  And as the platform matured, so has the size and experience of our development team.  That route is getting harder for the newer teams to follow.  Hopefully it won’t close entirely for bedroom coders of the next generation. 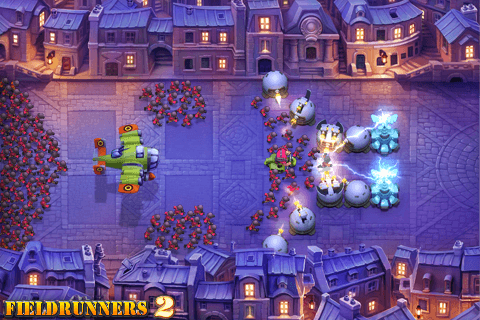 “After its iPhone debut, Fieldrunners made its way to countless platformers – most recently, the PC.  Can you speak a little on the importance of platform diversity?

Platform diversity has an obvious business advantage: if you can spread the development cost across more platforms you can afford to build a bigger game.  But more importantly, Fieldrunners was our baby.  We wanted everyone to be able to play it.  We had fans who only had Android phones, so we ported it there.  We had fans who only had the NDS, so we ported it there.  The PSP port seemed to garner a particular following.  The more requests we received for the game, the more platforms we brought it to.  We wanted people to play Fieldrunners on any platform available to them.
Also, while Subatomic Studios has generally focused on mobile platforms, as developers we have experience in everything from the Xbox 360 to the Amiga 32.  Porting to different platforms gives us more understanding of what those spaces.  Someday we may find a perfect design that would fit, say, HTML 5.  And there is an excitement when you see your work running for the first time on, say, a Roku.

It’s been nearly four full years since the launch of Fieldrunners.  Why so long before the sequel?

Since the original Fieldrunners launched in 2008 it has been undergoing constant development.  What is now thought of as Fieldrunners, is actually 10 times the size of the original title and with far more content.  The bulk of our team didn’t move off of full-time Fieldrunners development until the MudSlide/Lavaflow update in January 2011.
And this is no small update.  Fieldrunners 2 is an entirely new codebase, built from the ground-up.  Every scrap of art and animation has been made from scratch.  Our suite of new editing tools allow us to turn around new levels in weeks rather than months, giving more content and a richer experience than was possible before.  Our new scripting system allows for powerful behaviors of individual towers, enemies, maps, and anything else in the world.  Even the level of special effects is much higher this time, with the ability to do heat wave deformations, force ripples, muzzle flashes, and a whole lot else.  This is not an “old-game-with-new-art” update.  This is an entire redo of the Fieldrunners world and it makes for one of the best tower defense experiences out there. 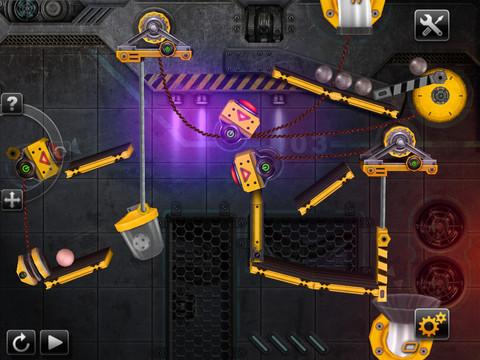 Were there other game ideas Subatomic was toying around with in the interim, or was Fieldrunners 2 always in the works to be your second title?

I can’t comment on any unannounced titles we may or may not have been developing in that time (wink).  However, I can say that we developed and released a fun little iPhone/iPad game with Autodesk called Tinkerbox.  It’s a simple and free physics puzzle game that teaches students certain basic concepts of engineering.  It has seen quite a lot of downloads, and is used in high-schools across the country as a teaching tool.  It’s not a main “Subatomic” brand title, but we’re proud of the little guy.

Tell us a bit about Fieldrunners 2.  What sets it apart from its predecessor?  What can players expect?

When we finally had the time to think about Fieldrunners 2, we had some basic goals.  We wanted to expand the moment-to-moment gameplay with swarms.  We wanted to create a larger sense of progression through the world.  And we were shooting for a Pixar-level of 2D visual quality.
The swarm engine is a big change to how the game plays.  It allows for runners to behave in natural ways with super fluid movement.  This means that slowing a tank at the front of a line of enemies will cause a traffic jam behind him.  Smaller units will push past larger units, and can even get shoved off course because of it.  Runners spread out in the open, and contract together in tight spaces. Bikes speed up on long hallways, and hit the brakes to take corners. 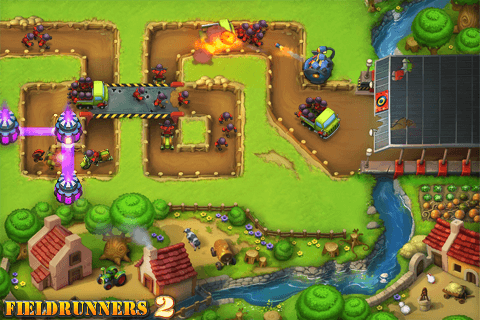 And with the swarm engine, we can add tunnels, bridges, holes, underpasses, separate platforms, mountains, mixed pathed and unpathed areas, separate regions within a level… the possibilities are endless!
To give the player a larger sense of progression, we’ve really built out a world.  As the player explores territories, earns stars, earn coins, and gain new towers and abilities.  They can then use these new tools on earlier maps, and play them in entirely new ways.  For example, once the player has earned the short-range high-damage Spark Tower, they’ll want to go back and turn all of their old maps into twisty S-shaped corners.  We tried to make the replayability of these maps as high as possible.  I still get people in the office showing me new tricks and combinations that I hadn’t thought of.

Since the series’ debut in 2008, there have been hundreds (if not thousands) of defense games released.  Are there any in particular you’ve really enjoyed playing?

We are all here because we’re developers who love touchscreen gaming, and gaming in general.  There have been a lot of tower defense games floating around the office. Armor Games’ Kingdom Rush, NCSoft’s Gem Keeper, and Double Fine’s Iron Brigade spring to mind.  And we’re looking forward to what our local friends at Fire Hose are cooking up with their title Go Home Dinosaurs.  But play those after you check out Fieldrunners 2!

Pitfall swings back onto mobile devices