The Merlion plays tonight in Singapore 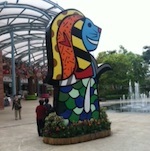 I learned two things while at Casual Connect:Singapore last week. One, Singapore was founded by an Indonesian prince who believed he encountered a Merlion, a half lion-half mermaid creature. Which, if you have ever been to Singapore, you would know that there is less of a chance of a lion roaming the hot and humid island than a mermaid swimming in its busy port waters.

And two, the game development industry is booming in this small island 3 times the size of Washington DC.

What accounts for this growth? The answer is geography and bureaucracy.

Geographically, Singapore hit the full house with this location in this world. Located on the most southern point of continental Asia and Singapore sits smack in the middle between India and China.

Its deep-watered port on the Straight of Singapore is the fastest sea route between India and China, making it the fifth busiest in the world. At any time, there are hundreds of ships on its coastline waiting to load and unload cargo.

And it is this same geography that makes it a natural gaming hub for Asia despite its small domestic market. The country is literally in between China and India, the two fastest growing gaming markets in the world. And it’s due north of Indonesia, the 4th largest country in the world and the nation that everyone agrees could potentially be the next hot gaming market.

The second reason for Singapore game growth is ironically, the thing we hate so much in the West, the government. Unlike everywhere else in the world, the bureaucracy in Singapore actually seems to work. You can witness this efficiency in its public transportation system that makes the trains in Germany seem off schedule, its clean streets and ports that do not have one mark of graffiti, and in its safe and orderly legal and business environment.

This being government, there are a lot of confusing acronyms to learn. There is the MDA, which provides grants to game developers to produce games in Singapore. The IDA which does the same for technology companies. And, the GSC (Game Solutions Center) which is an incubator and office space for start ups and big game companies (for example, Sony).

Love or hate big government, the facts speak for themselves:

During Casual Connect, the MDA revealed that it has funded 12 games currently (6 mobile, 3 PC/Facebook, and 3 for consoles) and that it is launching The Singapore Game Box portal, a new web site to support its Singaporean developers with reviews, hub pages, community, and online tournaments.

Thomas Lin, Director of Interactive Media, Games & Publishing, for MNA also shared the secrets of getting grant funding. MNA is looking to provide grants to game companies that have good intellectual property licenses, a games publisher, and local partnerships with development in Singapore.

This makes sense, though it is a bit of a chicken and egg problem. You need the money to fund a game to get the publisher or license, but you may not get the funding if you do not have the latter.

And, my takeaway is that whereas Singapore does a great job funding companies to help them develop projects, game companies are on their own to get their games discovered and published. I imagine the next logical step would be for Singapore to provide better match-making to connect developers with publishers overseas.

Regardless, I left Singapore impressed. I met with a bunch of Singaporean game companies and based on the demos I saw, we can’t wait to cover them here at Gamezebo. For a country with 5 million people, Singapore is making a outsized mark on global games market.

It’s a big day for KIXEYE: a new studio in Australia, and a mobile partnership with DeNA’s ngmoco

From console to social: how Jellyvision Games hopes to make an acclaimed franchise accessible for all [interview]