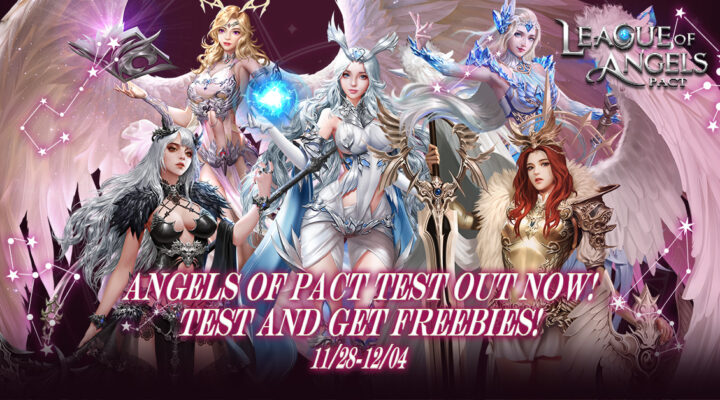 You’ll have to move quickly if you want to check them out, though. The Angels of Pact Test began on November 28th and ends on December 4th.

Before we explain exactly what the test involves, and why you’d be a fool to miss it, let’s remind ourselves why League of Angels: Pact created such a splash when it landed on Game Hollywood Games last month.

The latest in a series of popular idle-RPGs, League of Angels: Pact is aimed at fans of the series and those of you who are coming to it fresh.

It’s set in a vibrant fantasy universe where angels pretty much run the show. Your goal is to summon these angels, upgrade them, equip them with killer gear, and let them loose on your PvP, PvE, and single-player enemies.

Each of the angels in League of Angels: Pact has their own unique skills and attributes, and there are hundreds of them to collect. There are more than a hundred Divine Weapons, too, along with other powerful gear items to equip.

Plus, there are tons of modes, including Bosses, Raids, Quests, Road to Challenge, Twelve Holy Lands, and cross-server PK.

League of Angels: Pact is a casual game, with AFK gameplay and idle features, but there’s no shortage of tactical options to explore. It strikes just the right balance of accessibility and depth.

And for the next few days you can play your part in making League of Angels: Pact even better by answering a few questions and then playtesting the angels that are set to arrive in the game throughout 2023.

Once you’ve finished with the test you’ll get a DELUXE code. Share it on Facebook, meanwhile, and you’ll also get a PREMIUM code, helping you to boost your angels and claim lots of rewards.

To get started, head to Game Hollywood Games and click on the big pink button that says Enter Test.

The game also has Facebook and Discord pages, and an official site.

Cyber Monday: Buy a 2TB Lifetime Plan for $399 and Get a Free pCloud Crypto Folder