Home / News / The inspirations behind The Banner Saga [interview]

The inspirations behind The Banner Saga [interview]

The Banner Saga is an upcoming turn-based strategy game for PC and Mac, but its existence symbolizes much more than that. When the studio behind the title, Stoic, initiated a Kickstarter for The Banner Saga, it had initially hoped to raise the $100,000 necessary for the game’s development and distribution. The Banner Saga has since been funded nearly five times over, with almost $473,000 pledged via Stoic’s Kickstarter.

The game’s growing fanbase seems excited about The Banner Saga‘s mature story, Norse-inspired setting, deep, strategic gameplay, and its hand-animated cutscenes. But Alex Thomas, the founder of Stoic, is probably more excited than anyone about the game’s direction and development. Thomas kindly took the time to talk to Gamezebo about the inspiration behind The Banner Saga, as well as his feelings on the Kickstarter’s success.

Your Kickstarter is officially a success! Did you have any idea how popular your Kickstarter would turn out to be, or is this a pleasant surprise of sorts?

I don’t think pleasant is the right word. It’s been a crazy roller coaster of elation the last few weeks! Truthfully we had no idea how well the Kickstarter would do or if we would even make our goal. We had been working on a Kickstarter campaign since roughly January, putting together our announcement video and a working prototype to be able to talk about the game. Then Double fine and inXile blew the doors off the Kickstarter thing. We still didn’t know whether our concept would resonate with people, and aside from the BioWare history, we didn’t have the name recognition of those two projects. We’re profoundly aware of how much we lucked out on the timing of this whole thing.

The game’s animations look gorgeous. What prompted the decision to go with hand-drawn animation as opposed to computer-generated stuff?

Thanks! I was definitely the driving proponent behind going with 2D animation. It was my major in college and something that I’ve had a strong affection for growing up right on the edge of 2D’s rise to popularity. Disney movies were a big deal back then, only coming out once every few years. Video games were a huge part of my childhood as well, and the moment that it all came together for me was when I was at the local mall arcade and saw Dragon’s Lair for the first time. I thought it was the coolest thing in the world and someday I was going to do something like that. So really it boils down to one guy on a crazy nostalgia bent trying to make his childhood dreams happen. We’ve gotten so many positive comments about the 2D animation that I’m starting to think I’m not the only one. 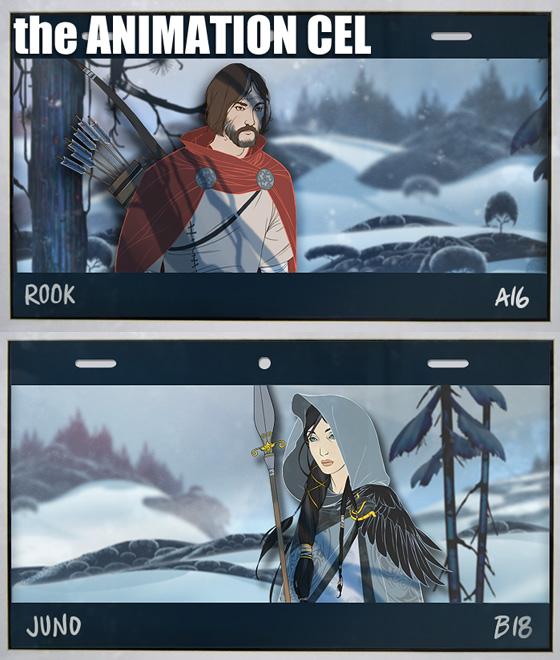 The viking theme is intriguing, too. Why did Stoic decide on vikings for The Banner Saga?

To us, vikings were an easy choice. Norse culture is still grounded pretty well in the feudal fantasy setting, which is something we knew we wanted for The Banner Saga, but wanted to avoid the tired, generic “elves, dwarves and orcs” world you see so often. Pre-Skyrim, vikings have been a rare thing to see in video games, and they have a rich culture of design and mythology to draw from.

One of the best things about the viking culture is that there’s a lot you can extrapolate from it that feels fresh. We don’t have to literally call the end of the world “Ragnarok” to imply that it might be happening. As the narrator says in the trailer we’ve just released, “the gods are dead and everyone knows it”. It’s not some kind of figurative statement, he means that literally the gods have died, the people in the world are alone, something is threatening their survival and they have to band together and rely on each other for survival. We want it to feel like a world that has weight and is grounded in history and myth instead of the story of that one plucky teenager who is the only one doing anything to save the world. What would a nation of hardened vikings really do in this situation? That’s the story we want the player to see.

Did it take a lot of time and imagination to come up with the rewards for the Kickstarter pledges, or did you fire up the project with a good idea about what you wanted to offer your supporters?

We definitely thought about the entire time we planned the Kickstarter campaign. We chose an art style that we thought would be unique and beautiful, and we really love the idea that the art style is something people would be proud (instead of ashamed) to display on their walls, so we went with a “game art as fine art” angle in the prizes we made. The biggest advantage we had was being able to mock up our prizes in a real setting, so you’re not just imagining what it will look [like]. This was something we hadn’t really seen other Kickstarter campaigns do to the degree that we did. It was time consuming to produce all the images but seeing now that we’ve sold out of almost everything and got huge demand to make the poster available at a lower price, it definitely seemed to be worth the effort.

Any brief insight on the good things and not-so-good problems that accompany crowd-funded projects? What has Stoic learned for its next crack at Kickstarter?

Actually, we’ve mentioned a few times that we don’t intend to do another Kickstarter campaign for the other parts of The Banner Saga, hoping that the income we get will support future production. We don’t want to burn out or disenchant the community. Basically, we really love the concept of Kickstarter as, literally, a kickstart. It’s a great way for people to buy into not just a product but an idea and support the people making it. But as we’re seeing people are getting orders of magnitude more than they asked for and I don’t think Kickstarter ever imagined that happening. We’re not quite as thrilled about the idea of Kickstarter becoming Kickfunder, where developers put no investment into a product and just say “give us a dump truck of money and we’ll make something, otherwise forget it”. I’m not saying that is happening know but we’re cautious about the potential to abuse the system. Kickstarter is driven purely by good will and as soon as people start to get suspicious of developers all that good will flies out the window and the whole concept is ruined for everyone. We’re taking our success as an imperative that people like what we’re doing and that we’ll do our best to live up to expectation.