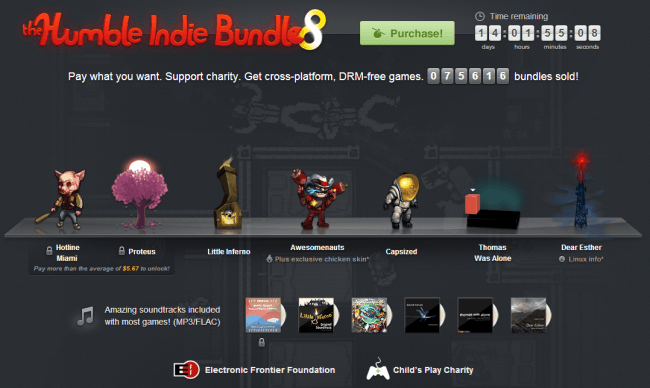 This time, the Humble Indie Bundle is featuring five awesome games, along with two full bonus games for anyone who pays above the average (which is around $5.67 as of this writing). So in other words, you really can’t go wrong with this deal: especially since the games being offered this time around make up one of the most impressive bundles to date! Here is everything that the Humble Indie Bundle 8 currently has to offer:

Most games in the collection also come with a free game soundtrack as well: as if you needed any more incentive to zip on over to humblebundle.com and scoop this bundle up.

As always, you’ll be able to divvy up your payment between the game developers, charity, and an extra tip to Humble Bundle itself, and each game is cross-platform and DRM-free. Over 70,000 bundles have already been sold, and you’ll have 2 weeks left to make your contribution and snag some seriously awesome indie games in the process.