The healing power of games 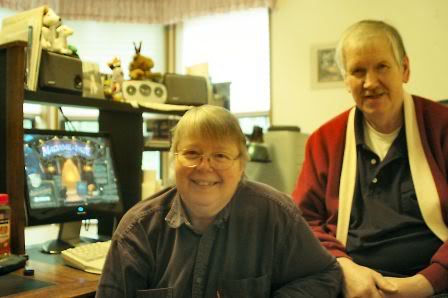 Given that Harold and Marilyn were both fans of the game’s hidden object style gameplay, where the goal is to search for specific lists of objects hidden within cluttered scenes, Marilyn figured that playing the familiar challenge might help Harold regain some of the range of vision that he had lost in the stroke that had paralyzed his left side from head to toe and left him unable to perceive things on his left side.

"If you gave him a tray for a meal, he wouldn’t see anything on the left side of the tray. If you put milk over there or juice, he wouldn’t drink it because he didn’t see it; to him it wasn’t there," explained Marilyn.

Because the game required Harold to search the entire screen to find all of the objects, looking left, right, up and down, it forced him to think about moving his head and looking on the left-hand side as he slowly regained his peripheral vision on the left.

"Gradually as he continued to play, it came back, fortunately for us, and he was able to see everything that was there," said Marilyn.

According to Marilyn, the game also helped to keep Harold’s spirits up. "It worked really well. It was amazing to see the difference, because number one he enjoyed it, number two he was familiar with it, and so he stayed with it longer."

Believe it or not, Harold’s case is not unique. According to a recent survey published by Big Fish Games, 85 per cent of respondents with disabilities reported that their health improved from playing casual games, and 66 percent said that games played a part in recovering from a catastrophic health episode.

“Games with complex visual tasks make people use visual and looking skills, and can be fun," said Dr. Louis Caplan, professor of neurology at Harvard Medical School. "They can be therapeutic for patients who have difficulty looking or seeing.”

“It’s not surprising that Peggle had the greatest effect on overall mood, given the game’s over-the-top celebration of players’ success each time they complete a level," said Dr. Carmen Russoniello, director of the study.

According to Harold’s therapist Valerie Pingel, a speech pathologist with the Mother Joseph Care Center in Olympia, Washington, one of the major advantages to using games as part of a patient’s rehab therapy are that they’re fun and engaging.

"In a way, you’re going through therapy without making it look like the client is doing therapy," Pingel said. "A lot of times clients will not enjoy doing cognitive therapy in the traditional manners, but if you can find something that they’re interested in, you’re able to work on their cognition in a fun, non-threatening way. [Games] are also very good for people that have attention, concentration and problem-solving difficulties."

For Harold, what began as therapy has turned into a full-fledged love of casual games. The former Boeing employee had been a reluctant computer user in the past, but now, according to Marilyn, he looks forward to the time they spend together working through the newest Mystery Case Files game, Madame Fate, and other hidden object games.

"He’s always calling out from the other room, ‘Is it time for us to play the game yet?’ so I’ve had to learn to share."

Welcome to the new Gamezebo!

Win a free copy of The Lost Cases of Sherlock Holmes