Home / News / The best games of #CandyJam (so far) 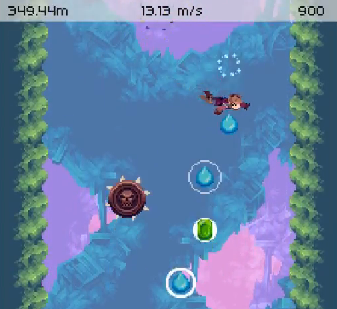 After last week’s debacle involving game developer King trademarking the word CANDY, game developers around the world vented their frustrations by participating in the Candy Jam, a game jam event designed solely to passive-aggressively taunt the trademark system as well as King’s other embarrassment from last week, being accused of ripping off another developer’s game. The Candy Jam website sets its mantra as: “Because trademarking common words is ridiculous, because ethics matter and because it gives us an occasion to make another game jam.”

Developers have since been working on creating their games, and uploading them to the Candy Jam website for others to check out. While the Candy Jam lasts through February 3rd, there are a good number of games already posted.

One of the more polished games posted is Discord Games’ Candy Chasm Saga, an endless-faller that involves falling down an chasm filled with candy, attempting to collect as much candy as possible while avoiding crashing into the scary-looking tokens floating about. Magnets are available to scoop up and make your candy-grabbing life easier, and golden apples provide limited invincibility. Candy Chasm Saga borrows art assets from Discord Games’ full-time project, Chasm.

Many other Candy Jam entries make a point of knocking off other well-known games by adding in a candy-flavored twist and leaving players with a big wink and a nudge. Candy Factory, from Not_BigM will remind many gamers of the popular web game, Cookie Clicker; Candy Crusher, from Dan Moran, is obviously a swing at the successful Angry Birds franchise (which many are quick to point out was a rip-off of Crush the Castle); and taketwotablet’s Infinite Candy Crossing is a Frogger knock-off.

Savage: The Shard of Gosen is one barbaric adventure

Watch us play Octodad: Dadliest Catch (and flop around like a cephalopod out of water)