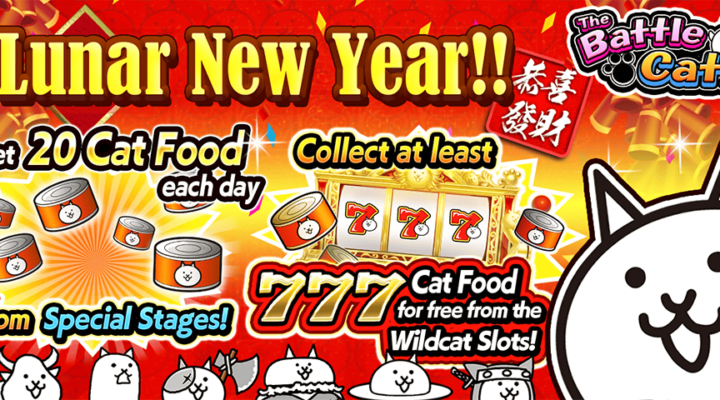 The studio is running a huge event in its popular casual tower defense game The Battle Cats. From January the 17th at 11am until February the 14th at 10:59am you’ll be able to load up on Cat Food by completing stages, entering contests, and more.

If you’re not sure why you’d want Cat Food, you probably haven’t played The Battle Cats before. Let us fill you in.

Originally released worldwide in 2014, The Battle Cats is a trippy strategy game in which the goal is to recruit cat warriors using Cat Food and use them to defend your base against attackers.

Each of the game’s 2D cat characters has its own unique abilities, and its own personality too. While The Battle Cats is very much a casual game, fielding the right cats in battle is a tactical challenge.

More than 65 million players have downloaded The Battle Cats in the last few years, and nearly 450,000 of those players have left reviews on iOS and Android, averaging an incredible 4.5/5 stars. Not bad for a free casual game.

If you want to see what all the fuss is about, there’s no better time than Lunar New Year. During the month-long event you’ll be able to claim free Cat Food every day just by logging in, and even more by completing stages on the limited-time Lunar New Year map.

You’ll get a free daily spin on the Wildcat Slots feature, too, with a guaranteed jackpot of 777 Cat Food. That alone is enough to beef up your army and load up on battle supplies.

Plus, if you can tear yourself away from the game you can take part in a contest for even more Cat Food on the official The Battle Cats Facebook page, before spending your abundant loot at the Rare Cat Capsule Machine, where you’ll get your first 11-Capsule Draw half-price.

The Battle Cats is available on Android and iOS.