The 5th annual Best App Ever awards are officially underway 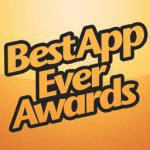 With the amount of apps on the App Store fast approaching infinity, it’s good to step back sometimes and honor the ones that rise above the rest. And, as it just so happens, that’s exactly what the Best App Ever awards are all about! Now in its fifth year, the event invites users to vote for their favorite apps in a number of categories, ranging from “Best Joke App” to the almighty (and eponymous!) “Best App Ever.”

The awards work like this: Each year people are given the chance to nominate whatever apps they like most for a variety of categories. Once this phase is complete, the ten apps with the most nominations go on to become finalists in their respective categories. Additionally, the ten apps that receive the most nominations across all categories become the finalists in the “Best App Ever” category. This portion has already been completed, and so now it’s time for everyone to vote on their favorite apps in each category. Easy peasy!

As much as I’d like to list out all the categories for you guys, there are over 100 of them. So, that’s not happening. But you can peruse the full list right here and, better yet, place your votes! And while we encourage you to vote in every category, it just so happens that Gamezebo is sponsoring the “Best Casual Game” category. Don’t you go emailing us for recommendations on who to vote for, though. WE’LL NEVER TELL.

If you’ve any intention of participating in the event, it’s probably worthwhile to follow the official Twitter feed and Facebook page. Both will keep you informed of important information—like how voting ends on January 31—and both will remind you that you voted for something and that democracy is pretty cool.