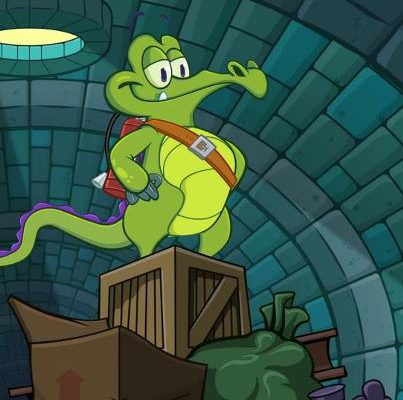 In November of last year, we reported on what was then an “upcoming” animated web series to be based on Disney’s mega-popular physics puzzler Where’s My Water? Today – almost exactly a year later – it seems the mouse house is willing to pull the curtain back on the first webisode of Where’s My Water? Presents: Swampy’s Underground Adventure. I know what you’re thinking…isn’t a year like, forever in internet time? Don’t we drive flying cars and download games to our brains now and stuff?

If that is in fact the case for you, this is one piece of media you’re going to want to store in your mind vault. Available at Youtube.com/DisneyShows, or from Disney’s official hub for Swampy, the short premiere episode represents the first in 12 weeks worth of adventures highlighting the gator’s imagination and curiosity. And to be honest? It’s kind of awesome. Centered around Swampy’s attempt to show off for his friend Allie, the three-minute episode is full of wordless comedy; sure it may be a glorified sight gag, but no one does feel-good slapstick better than Disney.

No one does cohesive branding better, either. To support the launch of Swampy’s Underground Adventures, the company will be simulcasting the premiere webisode on video screens located in 175 Disney stores around the U.S. tomorrow (Saturday, October 20th). Timed with the screenings will be in-store giveaways of activity sheets and stickers as well as the raffling off of Swampy plush toys. On one hand, part of me wonders if the well-meaning gator could draw crowds; on the other, I realize that for many children ten and under, the concept of Disney’s mascots have changed entirely. If nothing else, it speaks to the power of the games industry that Swampy is the first character whose transmedia promotion began with games.

In the coming weeks, we’ll be reaching out to Disney with a mind to discuss this evolution of iconography, as well as their effort to harness Youtube as a primary source of kid-friendly broadcasting. The times, they are-a changin’, and while flying cars may be a ways off yet, Swamypy’s Underground Adventures says a lot more about the future than you might think.