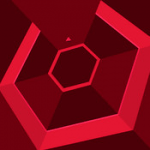 Super Hexagon, one of our favorite games from last year, is officially available for Android. If you’re debating whether or not to pick it up, you should probably decide quick: it’s briefly on sale for only $0.99.

For those who haven’t had the chance to play it, Super Hexagon is a game about fast reaction times. You control a tiny triangle cursor in the center of the screen, and your only goal is to successfully evade the many obstacles making their way towards you. It’s hectic, it’s addictive, and most notably, it’s immensely difficult.

Developer Terry Cavanagh stated on his blog that the game was tested on quite a few Android devices, so there’s a pretty good chance it will function just fine on whichever one you own. In fact, the only one known to cause problems thus far is the Nexus 7. So, sorry to Nexus 7 owners, but congratulations to everyone else, I suppose?

Tetris-branded Jenga and Bop It arriving later this year