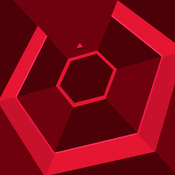 We’ve known for a while that Super Hexagon would be making its way to Android, but the details about when have been kept under wraps. Well folks, today that sort-of kind-of changes: the game will arrive on Android “very soon.” That would be the good news. The bad news, on the other hand, is that it won’t be showing up on the Nexus 7.

You see, developer Terry Cavanagh and Laurence Muller (who’s coding the port) have discovered some unfortunate gameplay issues with Super Hexagon on the Nexus 7. Not only is there a problem with latency, but also, in Cavanagh’s words, “every single touch overshoots.” That’s an acceptable dilemma in some games, but not with a game that demands as much precision as Super Hexagon.

Sorry I had to be the bearer of bad news, Nexus 7 owners. If it’s any consolation, you can pick up the game for pretty cheap on Steam. And as for the rest of you Android owners, assuming Cavanagh and Muller don’t discover any additional devices that can’t handle the game, you can expect to see it available in the near future!

Is Apple gearing up to launch a cheaper iPhone?