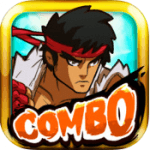 It was just a few short weeks ago when we brought you the news that Viewtiful Joe had found his way into the stylized world of Combo Crew to punch his way up the game’s challenging and baddie-filled tower. Well it looks like fans of the popular action game were treated to another surprise recently, as The Game Bakers have teamed up with Capcom once again to bring four familiar Street Fighter faces into the fold.

You can now play in Combo Crew as Ken, Ryu, Chun-Li, and Blanka from Street Fighter fame, in order to give The Boss at the top of that tower an energized fireball right to the face! Each of the new Street Fighter characters can be unlocked for use in the game via in-app purchase for $0.99 apiece. And not only do their character designs bear the perfect resemblance to the iconic cast of gaming fighters, but you’ll also be able to unleash some of their signature moves here in Combo Crew as well, so I think it’d only be best if we all celebrate this news with a resounding “SHORYUKEN!”

Combo Crew is available for download right now on the App Store and Google Play Marketplace, and be sure to check out the Street Fighter crew in action in the debut character trailer that you can find right within this page.