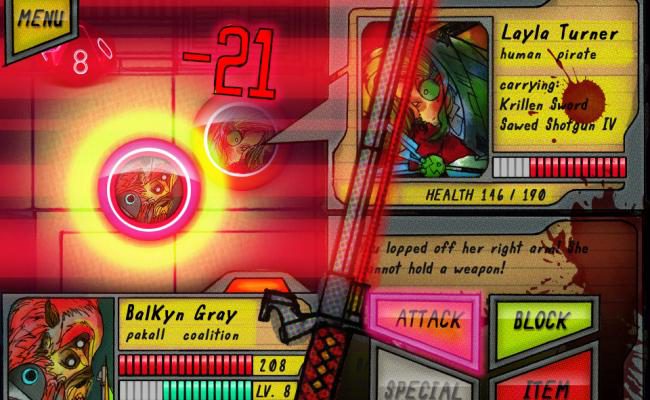 So what’s taking so long? We recently had a chance to ask Gilded Skull Games’ president Rob Lemon that very question. As it turns out, Rob and the Gilded Skull team have been hard at work – not just on Galactic Keep: Dice Battles, but on plenty of great games, from SpongeBob titles to the recently released Skull Smasher. Here’s what he had to say;

Yes, Galactic Keep is in development again. It’s been a long road.

We decided to start over with the development of Galactic Keep. Part way through the making Skull Smasher we decided to package up the best code from all the projects we’ve worked on into a structure (an engine) that we could use to make more games. Skull Smasher utilizes the first generation of this engine, Galactic Keep will use the the second generation. 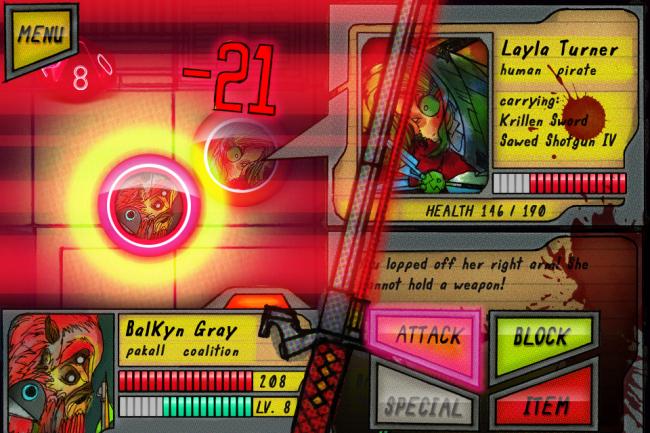 Despite really only getting a brief glimpse of what the game has to offer, the promise of an RPG that’s more pen, paper and dice than Final Fantasy has definitely left a lot of gamers excited. What prompted this unique direction?

There is something very compelling about the mix of decision making and blind luck in table-top RPGs: the creative randomness from the mind of a ‘dungeon master’ and the dice rolls played against the narrative that is developed while you play (or that may be pre-existing).

Not knowing what’s around the next corner, not knowing what you’ll be up against in your next battle and discovering where that next battle fits into the story of your character’s life, that’s true ‘role playing’! In table-top games, the best crafted adventures don’t have monsters spawning and re-spawning. The monsters are there for a reason:

“Wait a minute! This rotting adept’s spell-book says that the three ingredients we found, when mixed together, create a potion of transmutation! That monstrous beast guarding the bones of the king used to be the court wizard! What would happen if I drank this potion…can I drink this potion?” 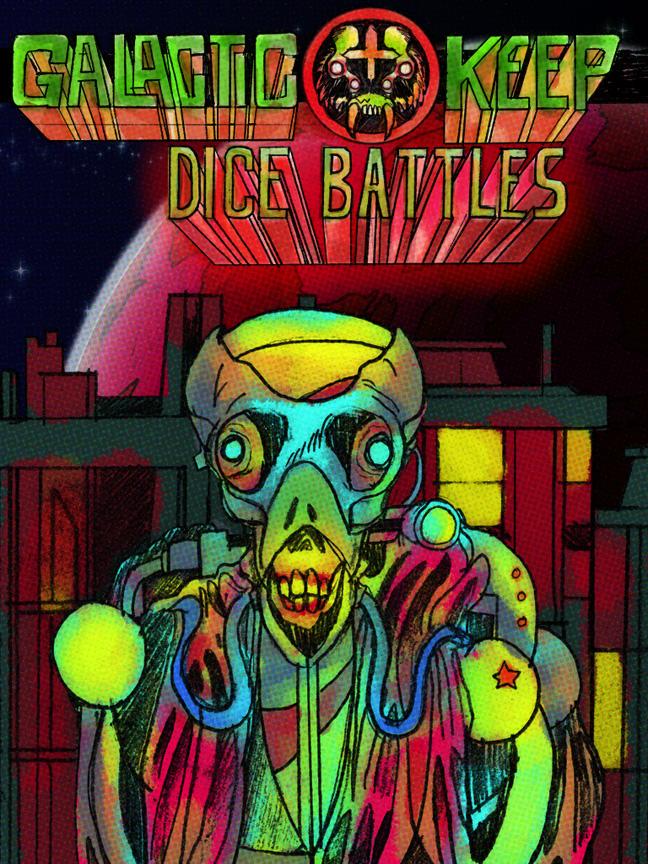 For our readers who might not be familiar, what should players expect from Galactic Keep: Dice Battles, and when can we expect it?

In Galactic Keep, the world is rendered to feel like a tabletop paper-and-dice exploration game. Players will roll a die to move and explore maps and to attack and battle enemies. Puzzles and mysteries set into the world will require the player to make choices, changing that ‘timeline’. There are many weapons to collect, special attacks to learn and playable characters to unlock.

The story of Galactic Keep involves figuring out how a very large number of humans somehow ‘appeared’ into another galaxy millions of light years away from Earth. The humans are trying to find their place amidst various species jockeying for positions of power, a galactic ‘military force’ attempting to keep order and various other factions and groups trying to create chaos.

‘Missions’ in the game will take player to diverse locations: a planet in the middle of a revolution against coalition forces, an experimental compound running out of a crashed battle cruiser, an orbital platform that’s been taken over by a group of mysterious visitors. We’re currently figuring out what’ll be initially available in the game. We are planning to release more missions (or ‘modules’) in updates.

Gameplay will involve the player choosing from several characters at the beginning of the game and ‘rolling’ their attributes to uniquely modify them. Players will be ‘dropped’ onto a map and must explore, making choices as they go. There will be monsters to fight, allies to make enemies to take down, puzzles to find a way out of.

We are going to try our best to release it this year. We’re putting all our resources into it (and likely getting more resources than we have right now to put behind it). 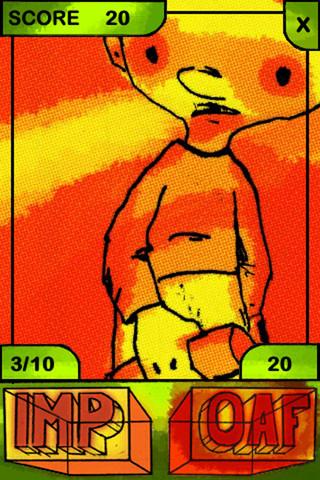 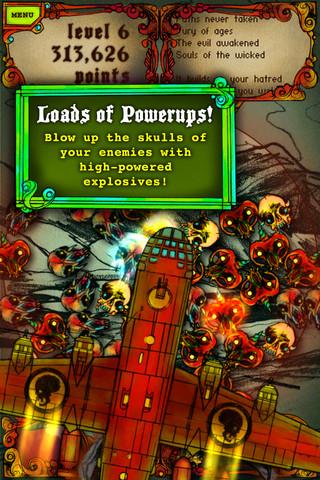 When it comes to games developed for the Gilded Skull brand, your titles have all showcased a unique hand-drawn art style with a great use of color. Where does this look come from?

In Skull Smasher and Galactic Keep are a lot of references to pulp sci-fi novel art of the 60’s and 70’s. Phosphorescent, fantasy artwork provides a contrast to the color palettes seen in a lot of games. The world doesn’t have to be shades of gray just because it’s a dystopian future.

Licensed games are often hit or miss, but Gilded Skull was responsible for two fantastic releases under the Spongebob banner. How did your team hook up with Nickelodeon?

I worked as a game producer for Nickelodeon before I started Gilded Skull. I was still working with them freelance when they approached me (through Gilded Skull) with the basic concept for ‘Marbles and Slides’: a physics game with a rolling object that you get from point (a) to (b) by drawing a line. We took that concept and ran with it.

With the success of ‘Marbles and Slides’, Nickelodeon approached us to create another game. They had another basic concept: A physics puzzle game where you fire ‘something’ to knock ‘objects’ that would bounce around the screen for points. This developed into ‘Super Bouncy Fun Time’. 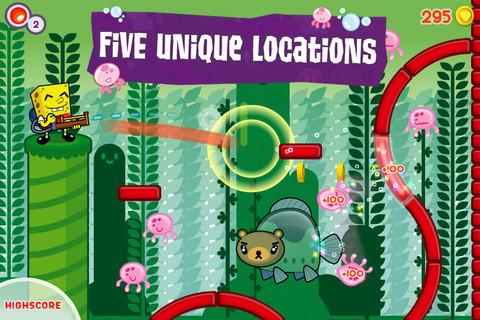 Can we expect more Nickelodeon games from Gilded Skull in the future?

We enjoy working with the people at Nickelodeon very much. We’ll see! We’d like to finish working on Galactic Keep first.

The physics aspect is different from any ‘Collapse’ style puzzle games I’ve played. Originally it was going to have standard gravity, the skulls would fall straight down from the top. In order to mix things up, we decided to test a gravity well in the center of the screen…and that worked really well!

It has bosses with health meters…something not seen in many puzzle games. The art style is certainly unique. The roughness of the art is complimented by the music, grungy riffs and frayed edges! 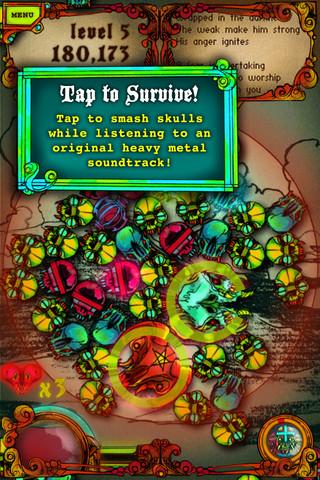 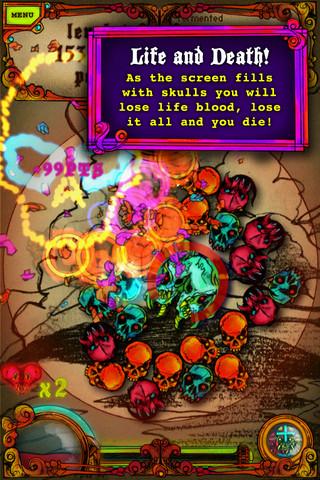 You’ve mentioned that more content may be on the way for Skull Smasher. What can players expect in future updates?

We’ve just launched the universal version. This update brings the game to iPhone, which was something we wanted to do from the beginning. We tuned the difficulty a great deal, it’s more challenging now and it ramps up a lot more quickly. Games are much more frenetic and tense.

If the universal version does well, we have a lot of ideas (and art already created) for new power-ups: a ‘sentry’ that fires out a spinning axe when tapped; a ‘destroy all’ button that can save you if you’re about to die; a sword/dagger that would enable you to cut slices with your finger through the skulls and a few others. We all have a lot of ideas for varying the gameplay so if there is an outcry for more, we will answer!

Social games and gambling: what a long strange trip it’ll be