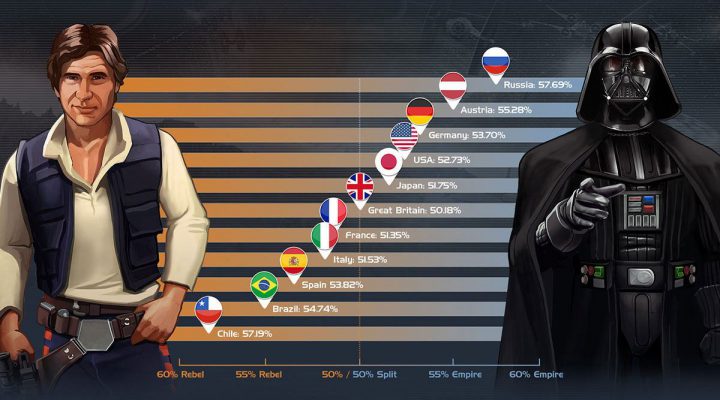 In only a few weeks, Star Wars: Commander has racked up five million players. That’s a mighty big number, even for a galaxy far, far away.

To celebrate, Disney has just released an infographic detailing (among other things) which nations had a greater percentage of Imperial or Rebel players. The results, at least in our opinion, we’re pretty surprising.

With some minor exceptions, it looks as though players in North America, Asia, and Australia tend to side with the Empire, while those in South America, Africa and India tend to go Rebel. (we know India’s not a continent, but when you have 1.2 billion people, you’ve earned your own mention on this list).

A great map showing the difference, and other cool stats, can be seen in the infographic below:

Want some more cool knowledge about this one? Be sure to check out our Star Wars Commander Tips, Cheats and Strategies.

Where to Watch Apple’s iPhone 6 Livestream