Home / News / Spellirium is a 10 letter word for adventure! [interview] 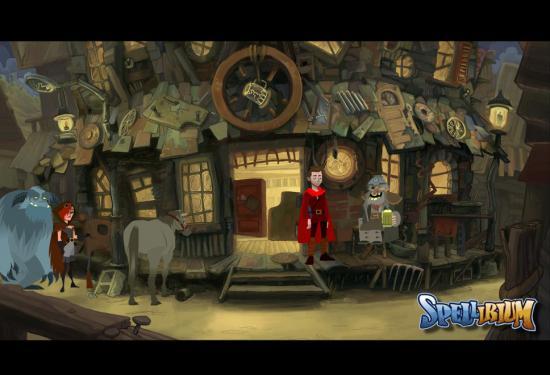 From Puzzle Quest to King Cashing, genre mash-ups have resulted in some wonderfully memorable releases in recent years. Inspired by one such mash-up – or more specifically, his disappointment in one – Untold Entertainment’s Ryan Henson Creighton set out to create the perfect blend of wordplay and graphic adventure. The end result? Spellrium.

We recently had a chance to talk with Creighton about his upcoming release, where he told us his thoughts on everything from the game’s inspirations to the challenges of funding.

WORD NERDS BEWARE: Despite being a word game aficionado and Keeper of the Queen’s English himself, Ryan Henson Creighton habitually writes with a lower-case “i” when referring to himself. Don’t let it throw you. Keep calm and carry on.

Tell us a little about the genesis of Spellirium.

Long ago, Jerry Holkins (“Tycho” of Penny Arcade fame) wrote an article about a wondrous game called Bookworm Adventures. He talked about all the amazing things the game could do, and how brilliant it was. Based on his recommendation and glowing review, i purchased Bookworm Adventures sight-unseen. i’m sorry to say that it fell far short of what i expected. But i still had thisvisionof an incredible story-based word game that Jerry put in my brain. Spellirium is that game.

Between developing both Spellirium and Sissy’s Magical Ponycorn Adventure, it seems pretty clear that you have a deep love for adventure games. Are there any classics you’re particularly fond of? What adventure games have helped inform your creative process?

My favourite game of all time is The Secret of Monkey Island 2: LeChuck’s Revenge. You’ll find a similar sensibility in Spellirium: a very funny game against a very dark backdrop. i mean, MI2 had you torturing people with voodoo dolls, robbing graves, rowing coffins like they were boats, and facing the literal skeletons of your dead parents. But it was hilarious. As for my other influences, LOOM is a big one. Jim Henson’s dark fantasy films like Labyrinth and The Dark Crystal are right up there. Same with Lloyd Alexander’s Prydain Chronicles (except our Bard character is more aggravating than endearing). Early into development, i actually wrote an article called “How to Steal Like a Pro” where i list many of my influences, so that when people say to me “Hey! Spellirium is just a rip-off of X”, i can say “of course it is. i said so in this article.“

Speaking of adventure games, Tim Schafer has made something of a splash in returning to the genre via his recent Kickstarter project. As a fan, how high are your hopes on this one? Have you thought about raising additional funds for Spellirium through Kickstarter?

Tim could blow all the cash on cocaine and burn Double Fine to the ground for all i care – i’d still consider it money well spent. Backing the Double Fine Kickstarter project (which has now closed at over 3 milly) is, i think, a bunch of people saying “WE LOVE ADVENTURE GAMES”, and “we affirm that Tim and Ron made the very best of them”. It’s a vote for nostalgia, and a celebration of a bygone era that we’ve constantly told ourselves had ended because nobody liked adventure games. It’s wonderful to see the Kickstarter campaign challenge that myth.

i have a blog article to answer every question, it seems … but the story about launching a Kickstarter for Spellirium is still rattling around in my head. Aside from the fact that Kickstarter does not support international (read: Canadian) campaigns (you have to have an American bank account and social security number), i have this weird aversion to pre-sales. It dates all the way back to when i was around eight years old, and i canvassed the neighbourhood pre-selling this storybook that i hadn’t written yet. My mom totally had a baby over it, and told me never to do it again. That admonishment stuck with me, i guess. i think if i launch a Spellirium Kickstarter campaign, i’ll be grounded. 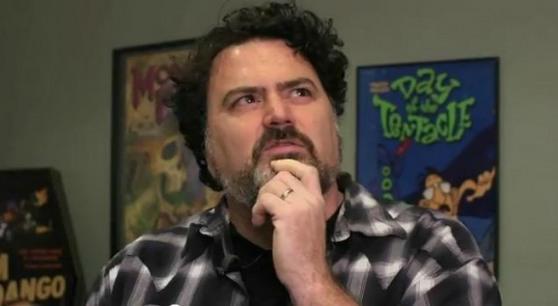 You’ve described the look of Spellirium as “trashpunk.” Can you elaborate on that?

The term “trashpunk” stems from “cyberpunk”, which describes a subversive attitude augmented with technological chutzpah. Cyberpunk characters are all about bringing down the system via hacking – either by hacking corporate computers, or by hacking their own brains and bodies. From that, we get “steampunk”, which describes less of a manifesto and more of an aesthetic – an alternate universe in which high technology is built with low-tech materials like copper pipes, gears, brass and wood. The “trashpunk” world of Spellirium, like steampunk, combines both an attitude and an aesthetic.

There are two key elements to the world of Spellirium. The world – our modern world – has been buried planet-wide beneath a mile of earth, busting the planet back to the Dark Ages. The survivors can havestuff, as long as they’re able to dig it out of the ground. But with no gas and no electricity, they resort to building everything out of found items – essentially, garbage. So a collection of cars makes a sheltering teepee, and a satellite dish becomes a spittoon.

The second important thing about Spellirium is that reading and writing are outlawed, hence the game’s tagline “It’s the end of thewordas we know it”. Regaining the knowledge that civilization once had is no easy task, when simply digging up findage with “forbidden runes” on it will get you killed. And so, the people of The Land live meagerly, and are bound to stay that way … until you come along, of course. That’s where cyberpunk-like subversion comes in.

While the wordplay elements seem to come from the Boggle family, you’ve made it your own by forcing players to not just spell words, but figure out which words are the right ones to spell. What can players expect?

That’s Spellirium‘s coolest feature, and we’re already halfway through the article! Unlike Bookworm Adventures where you can just spell big strong words to beat up monsters, Spellirium constantly changes the rules on you and challenges you to spell words creatively to solve puzzles. For example, one monster in the game gets bigger as you spell large words. The bigger it is, the more damage it does, so the strategy (with that monster) is to spell little 3-letter words to cut the monster down to size. Another monster has two heads, and can only be defeated when you spell palindromes. A pair of twin monsters can only be defeated when you spell words with double letters in them (APPLE, DOOR, POOL). Some monsters only respond when you spell words using tiles of a single colour.

There are non-monster challenges, too. To spin a bundle or raw wool into yarn, you have to build words in a circular motion (across, down, back and up) to spin a spinning wheel. Another challenge has you finding synonyms for the objects in a scene.

It’s these ever-changing challenges that really set Spellirium apart from the pack. Other games ask you to build words. Spellirium takes a true love of word-building to the next level. 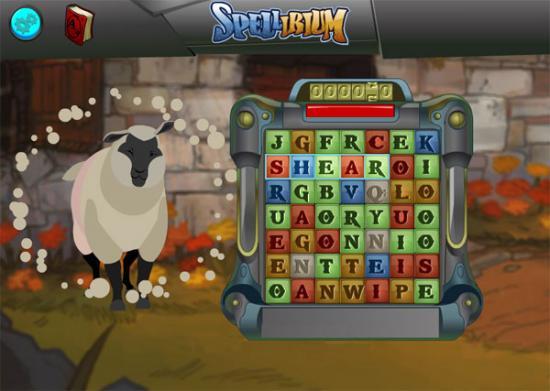 A little over two years ago, you launched the Flash word games portal WordGameWorld.com as a way to do a little market research for Spellirium. What did it teach you?

It taught me to NEVER LAUNCH GAME PORTALS TO PROMOTE OTHER THINGS. i knew very early that in order for Spellirium to succeed, i would have to target a niche audience (which i’ve affectionately dubbed “word nerds”, like myself). WordGameWorld.com was an attempt to find that audience by luring them in with free word games. Since we owned the portal, we owned the ad inventory – all the banners – and we could promote Spellirium as much as we wanted to.

Good idea in theory, right? Well, we launched the portal, and no one came. So i came up with anothergreat idea: why not build anetworkof free-to-play game portals? Then, if one was very popular, traffic would trickle out to the other portals. That’s why we launched ZombieGameWorld.com and TowerDefenseGameWorld.com a few months later.

Can you guess what happened? Crickets, all around. Hundreds and hundreds of free-to-play games targeted at niche audiences, and no one came.

Not one to give up easily, i thought it would be a brilliant idea to produce VIDEOS to promote ZombieGameWorld.com, by paying members of the site Fiverr.com to woodenly read my hilarious scripts. The whole sordid affair is documented in our series “Pimp My Portal” on the Untold Entertainment blog. If nothing else, it’s an entertaining trainwreck.

Logically, no one watched the videos either. It was like the old lady who swallowed the spider to catch the fly, and then winds up eating a live horse and dropping dead. In the end, we decided to just focus on making Spellirium a great game that word nerds will love.

As a fellow Canadian, I can’t help but notice that the game is partially being funded by the Ontario Media Development Corporation – a government agency that’s helped fund a surprising number of top notch games over the last few years. How has working with them been?

We’re so lucky to have initiatives like the OMDC Interactive Digital Media Fund here in Ontario. It’s a wise move by the government to stimulate the video game industry in particular, and it’s been a joy working with the agency. The trouble we’ve had lately is that the OMDC is held to strict program policies, and Spellirium is ending is two-year program run. The account needs to be closed out for fiscal and reporting reasons, but the game isn’t finished yet. So there’s a tension there between what the OMDC needs in order to report as many successful projects as possible (so that the Fund will, hopefully, be renewed), and the time that we need as a studio to lavish the love and care on Spellirium that it deserves. We know that Spellirium will be one for the OMDC to write home about … we’re just hoping that our creative needs and their bureaucratic/political needs can harmonize. (If not, well … THEN we’ll consider a Kickstarter campaign!) 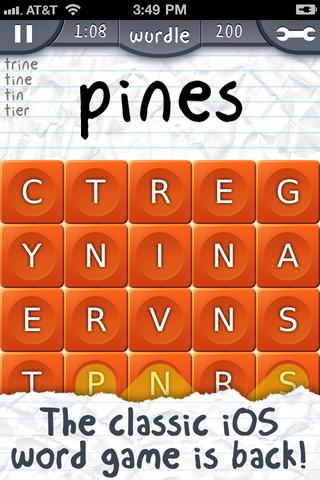 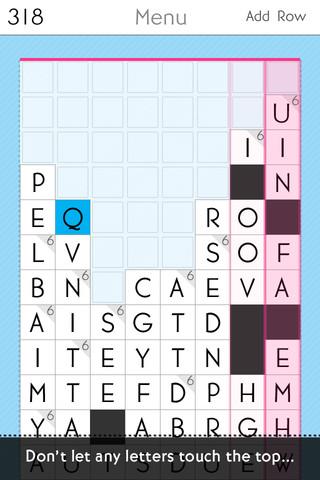 In preparing for Spellirium, it seems safe to assume that you’ve been playing a lot of word games. Are there any that have managed to stick out as the best of the best in your opinion?

Well, i adore the classics – Boggle, Scrabble, crossword puzzles, and the pen-and-paper puzzles from the Dell/PennyPress variety magazines. (That’s right – i said “pen.” That’s how i roll.) i enjoy Bananagrams, but i kind of kick ass at it, so no one plays with me. (“Peel!” “Dammit!” “Peel!” “DAMMIT – knock it OFF, already!”) Adam Saltsman, the creator of auto-run granddaddy game Canabalt, has a great little iOS Boggle clone called Wurdle. Jumbline and its sequel are truly great speed-anagram games. SpellTowerand PuzzleJuice are two recent iPad word games you might want to try. Please let me know if you crack 8000 points in your first attempt at the SpellTower puzzle mode. i was pretty proud of myself.

You fire up Spellirium and your opponent is the last thing you’d expect to see – a wily games journalist working on a deadline. What’s the one word you’d spell to describe your upcoming game and instantly win the enemy (and his loyal readers) over, making them wish they could pre-order Spellirium right now?

If hyphenated words that exceed Spellirium’s 8-letter limit are acceptable, then i’d have to say “CANCER-CURING.”

Zynga reportedly in talks to buy OMGPOP and Draw Something