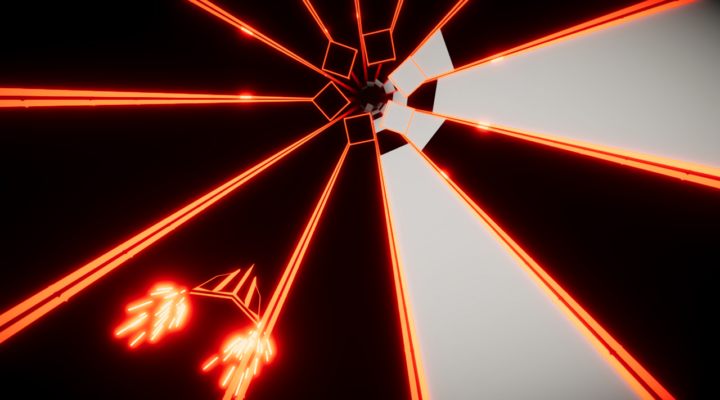 Space Heist could just as easily have been called Space Getaway.

A heist is a complicated affair that involves studying schematics, casing joints, and looking snappy in a suit. You don’t need to worry about any of that stuff in Space Heist. You just have to fly fast.

Developed by Upstairs Studio, the team behind the highly inventive Blind Pong, Space Heist is a hyper-casual game that sees you piloting a sleek, glowing craft through a rotating 12-sided tube suspended in space.

Naturally that means you need to keep moving left and right to stay on the right path. This would be simple enough if it weren’t for the game’s other major hazard: blocks.

As you hurtle forwards you’ll have to negotiate rows of cubes that patrol the inside edge of the tunnel. Once again, you can pass through cubes of the opposite color without taking damage, while colliding with the same color will cost you a life.

You’ve got two power-ups on hand to help you avert disaster. There’s a speed boost, which lets you briefly glide over any surface you like, and a ray that changes the color of the cube in front of you.

These power-ups are in short supply, however, so you need to use them wisely. If you can refrain from using them at all you’ll eventually get a super-powerful version that lasts longer and works better.

At the end of each run you’ll get points. You can spend these on unlocking new ships, color themes, and extra lives. Plus, you’ll get to see where you sit on the leaderboard.

And that’s it. Space Heist is a simple, addictive, and infuriatingly tricky casual arcade game. You can download it for free right now on the Google Play Store or the App Store.