Home / News / Sony’s Kaz Hirai: “what we bring to the table is a completely different experience from the casual gaming that Apple brings”

Sony’s Kaz Hirai: “what we bring to the table is a completely different experience from the casual gaming that Apple brings” 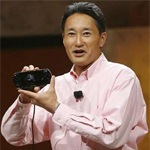 Reuters is reporting that, in an interview conducted at E3 on Tuesday, Sony Computer Entertainment CEO Kaz Hirai took a moment to discuss the success of the iPhone and why it’s not a direct threat to their PlayStation Portable;

“They’ve created a great market for a lot of casual games, but I think the important thing to remember… is that what we bring to the table is a completely different experience from the casual gaming that Apple brings” says Hirai. ” “What we stand for as an industry, the traditional video gamer if you will, it’s more ‘let’s sit down and play an immersive gaming experience’ as opposed to “I’ll pick it up I’ll play for 5 minutes and then life goes on.’ … It’s a different kind of gaming, there are some buttons [on the iPhone] but they’re not physical buttons, and if you’re looking for precision game play you have to have physical buttons.”

Hirai makes a convincing argument, but looking at other factors we can’t help but feel it’s little more than PR bravado. After all, the PSP Mini’s program has been plagued with iPhone ports, and their latest ad campaign takes a direct swipe at the iPhone – an action that’s not really in keeping with a competitor that you don’t really see as competition.

The ad in question features a young gamer named Marucs Rivers petitioning Sony to spread the word about how great the PSP is. The main focus of his argument, however, is that kids are “gettin’ hussled” into playing games on their phone; “These PSP games are the business, and I can’t stand hearing these kids talking about some weak app on a phone. … They gettin’ hussled. …We got good kids playing bad games.”

The next ad in the series is even a more direct attack on the iPhone;

If the iPhone is aimed at a different section of the market as Hirai implies, why is Sony making them the whipping boy in their latest ad campaign? And which audience are they trying to target here? “Traditional” gamers who have discovered a love for new experiences on the iPhone? Casual gamers who the PlayStation brand admittedly isn’t aimed at? Just who is Marcus trying to sell to?

Whoever Sony is trying to target, one thing is certain – their actions don’t matching up with their words, leaving Hirai’s bold claims of separate markets as hollow as the PSP’s North American sales.

Zynga raises 150 million big ones from Softbank – Now What?