Sony shutting down four online games by end of March 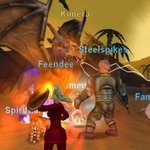 It’s a sad day for online adventurers: Sony Online Entertainment (SOE) has announced that it’s shutting down four of its massively multiplayer online games (MMOs). Among the casualties are Cosmic Rift, Infantry, Star Chamber: The Harbringer Saga, and EverQuest Online Adventures for the PlayStation 2. All four games will breathe their last by March 29.

Not only will the MMOs will be coming to an end, but Sony will also be shutting down all official websites and and forums related to the games. If you’ve made friends with other players, it’s a good idea to arrange a new place to meet. Might we recommend World of Warcraft?

“Each of these games shares a special place in both ours and our players’ hearts,” Sony wrote in its goodbye letter to its EverQuest Online Adventures (EQOA) players. “This is not an easy decision, but there comes a time when it’s best for our developers to move on to the next adventure, and that day has come.”

If your stuff is packed and you’re already set to move on, Sony is offering three free months of EverQuest or EverQuest II Gold to current EQOA subscribers. The company has already ceased billing on EQOA.