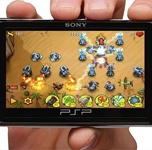 They may not be the dominant force in video games that they once were, but that hasn’t stopped Sony from trying new things to bring their PlayStation brand back to the forefront. One of these attempts came last fall when Sony unveiled PSP Minis, their new branding for bite-sized games that would be available exclusively through download for the PlayStation Portable (and later the PlayStation 3). Nowless than a year later, SCEA’s Rob Dyer admits that the content hasn’t offered the originality that gamers might have hoped for.

The above is a quote from a rather lengthy interview with Gamasutra in which Rob Dyer, Sony Computer Entertainment America’s senior VP of publisher relations, speaks frankly about the struggles that Sony has been facing with it PlayStation brand over the past few years. Dyer also discusses whether or not the Minis program is a good fit for the PlayStation audience. “If you have a PSP or a PS3, do you want to play small bite-sized games like that? I think the jury’s still out. I think in some instances they do, and some instances they don’t.”

Going head to head with the iPhone in the bite-sized gaming market is a gutsy move, but it might not have been one that made sense with the PSP’s existing demographic. With a shift in focus to original titles and a newfound attempt to satisfy their core audience, Minis have the potential to become a major player in the downloadable market. We’ll just have to wait and see if Sony agrees.

Meet the man who wrote the FarmVille song