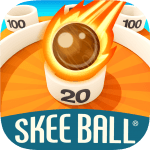 Everybody loves Skee-Ball. It’s all the fun of bowling combined with the thrill of pumping quarters into a metal slot. Scopely, the developers behind a little game you might remember called Mini Golf MatchUp, have recently announced that they’ll be bringing the officially licensed Skee-Ball Arcade to the App Store and Google Play on November 20.

This shouldn’t be confused with ngmoco’s Skee-Ball – which mysteriously disappeared from the App Store and was re-launched as Arcade Ball a few months ago. (methinks there was a licensing deal that ended to allow for this Scopely release – but let’s file that purely under “speculation”)

That said, ngmoco’s title was a chart-topper for a time, so we know that Skee-Ball is a formula that has plenty of potential on mobile devices.

Few details have emerged, but if the trailer is anything to go by, you should expect a variety of wacky playing fields, power-ups, and the ability to “challenge your friends” – an element that Scopely excels at. Keep an eye out for this one when it hits next week.

Why Moscow Matters: Russia is an emerging market you should keep an eye on