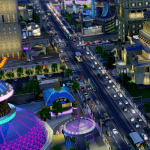 So many wonderful cliches could apply to the work in progress that is SimCity. If at first you don’t succeed? That definitely fits. Pretty soon, third time’s the charm could be even more apt, because EA and Maxis just announced Update 3.0, a patch that will hit later this week and hopefully come without the bugs that plagued its predecessor.

Foremost among the fixes this time around is an attempt to clear up traffic. If you’ve played the game at all, you already know that no matter how slick you are at laying out roads, your virtual citizens are going to get into traffic jams, often because of their hilariously incomplete set of driving skills. Update 3.0 promises to remedy that with a healthy dose of the basics, including logic on u-turns, required stops and the option to turn right on red. Workers will also stagger their start times and travel to fill open jobs elsewhere in the region more efficiently.

Pollution should also be easier to handle thanks to changes to both air and ground pollution. Mass transit is getting tweaks to both trains and streetcars, and there are a host of cosmetic upgrades as well.

It would be a litle foolish to expect everything in the patch to turn out error free given the game’s track record to this point, but it’s at least comforting to know the Maxis team is going to keep plugging away. And hey, even if Update 3.0 goes off without a hitch, we’ll always have the siren trees.

The Night of the Rabbit gets magical on May 29; first trailer out now