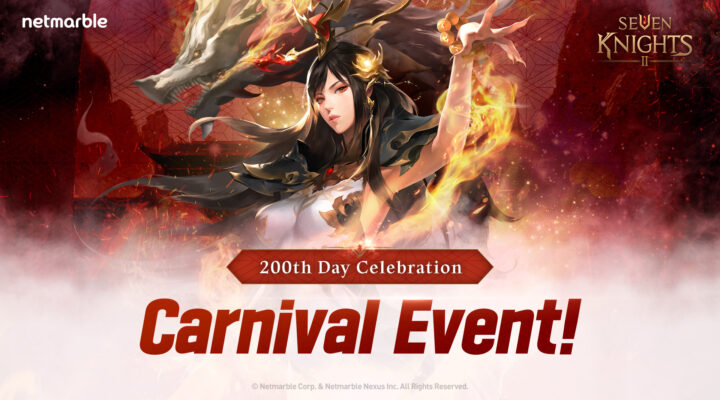 That’s right: Netmarble’s highly acclaimed mobile MMORPG has been around for nearly two thirds of a year already. And that sort of milestone calls for a celebration.

Hence, the Carnival event. From today, you’ll be able to access new missions in Seven Knights 2 and obtain a whole swathe of rewards. We’ll explain what those are later. First, a bit of background.

Featuring new and established heroes and a gripping new storyline, Seven Knights 2 sees you collecting characters and assembling them into four-strong teams as you set out to find Rudy, the last member of the Seven Knights.

Like its predecessor, Seven Knights 2 is a stunning game. Just take a peep at the trailer. The textures are detailed, the designs are lush, and the skill animations will blow your socks off.

Okay, you’ve got the gist. Now back to the Carnival event.

The rewards on offer include a Legendary+ Hero Selection Ticket (the most powerful characters in the game), Legendary+ grade accessory selection ticket (which everybody wants) a Legendary Hero Summon Voucher, a Legendary weapon, and various accessories, equipment items, and a ton of Rubies.

Plus, there are two new playable characters to add to your army, and they are now on pick up banner as well.

Empress of Aisha Rin (Legendary+) is a veteran of the original Seven Knights. She reappears in Seven Knights 2 as an Empress fighting against the dark scheme that is taking over the continent of Aisha. She is a powerful ranged PvP hero with an AoE stun skill, fitting for an empress.

Meanwhile Romantic Mechanic Guilahan (Legendary) is a master of technology, further enhancing his arsenal through his knowledge in machinery. Wielding his partner in crime “Elizabeth”, Guilahan is a Tanker who excels in Guildraid by granting Silence Resistance to his allies, and wields the Guildraid Suppressor for Silent garden, providing a significant advantage if you want high score in Guildraid.

Once you acquire the two heroes noted above, you can accelerate their growth through the Rin/Guilahan Growth Support Event. In this event, you can get your hands on ten Soulstones and other materials needed.

And that’s not all. There are more events going on in the game other than the Carnival.  A second collaboration with Seven Knights Revolution: Hero Successor, the popular anime series is also underway. This collaboration introduces Faria’s main role as Pet, letting you obtain rewards and exchange Faria by consuming Rubies.

With all the events and rewards going on in the game, now is the chance to start as a new player or come back to the game as a returning player and start with a guaranteed Legendary+ hero, a bunch of legendary heroes and equipment.