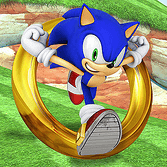 Say, remember that rumor we posted last week about Sega working on a game called Sonic Dash? It turns out there was a whole lot of truth to that! Sonic Dash exists, and it’s coming soon to an iDevice near you.

The game was announced in a blog post over on Sega’s site, and while they didn’t offer up a ton of details, one thing we know is that it will be an endless runner. Considering Sonic’s obsession with running incredibly fast, that makes a good deal of sense.

There was also a mention of stages, which could well mean Sonic’s running won’t truly be of the endless variety. Or maybe there will just be several different levels that never end. In any case, all this action will be documented on leaderboards, meaning you and your friends can finally settle that dispute about who’s better at controlling a speedy blue hedgehog. Finally, right?

We’ll be keeping our ears to the ground for more info about Sonic Dash, and you’ll be the first to know if we hear anything. In the meantime, let’s all just marvel at how long it took Sega to make an endless runner featuring Sonic.

20% off all games at Big Fish today

Games We Can’t Wait to Play: Citizens of Earth, Disney Infinity and more!