Home / News / Save the world one verb at a time in Marvel Run Jump Smash!

Save the world one verb at a time in Marvel Run Jump Smash! 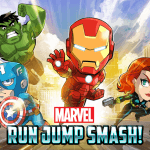 Marvel has announced a brand new mobile runner game at their Comic Con 2013 Games Panel over the weekend, which lets players take control of their favorite Marvel superheroes and run through a number of iconic locations from the comic books, as they race to save the world from the imminent threat of evil.

Marvel Run Jump Smash! has already been a smashing #1 hit for some time now in Korea, and now that the fast-paced and cartoony arcade game is nearing a global release at some point this fall, there’s no telling how quickly it will take the rest of the world by storm. In the game, players will switch back and forth between controlling a number of fan-favorite Marvel superheroes, from Iron Man and The Hulk, to Captain America, Black Widow, and even Nick Fury!

As the title suggests, you’ll be doing a lot more than just running in Marvel Run Jump Smash! since each superhero’s abilities will be taken into consideration for their own level segments. For instance, you’ll be able to fly around as Iron Man, smash everything into smithereens as The Hulk, and even engage in some volatile gunplay as Black Widow. And of course, that’s without even mentioning what can happen once you unleash each character’s respective super ability on top of that!

Marvel Run Jump Smash! is currently slated for a release this fall on all mobile platforms, but if you can’t wait until then to traverse the city limits as your favorite super pals, then you can always check out the verb-packed gameplay trailer of the upcoming mobile romp right here in this article! Super villains beware!

Free Games and Sales: World of Goo, The Testament of Sherlock Holmes and more!