Home / News / Samsung uses the “but it was in a movie!!” defense to fight Apple’s iPad patents

Samsung uses the “but it was in a movie!!” defense to fight Apple’s iPad patents 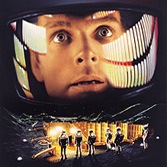 Let’s face facts: Apple is involved in a lot of lawsuits. Whether they’re being sued for infringing on somebody else’s patents or they’re suing to defend their own, the number of litigations the company is involved in at any one time can’t possibly be counted on fingers and toes. That’s part of the reason we don’t normally cover them here on Gamezebo – reporting on Apple lawsuits would be like writing an article about the sun coming up every morning. But when a company cites a science fiction film from 1968 as the basis for their argument? That’s a story that’s hard to pass up.

Earlier this week in a San Jose court room, Samsung – in an attempt to prove that their tablet PC’s don’t violate patents held by Apple regarding the iPad – tried to convince the court that Apple should never have been granted the patent in the first place. Why? Because tablet personal computing with a form factor similar to the iPad had been invented 43 years ago… by Stanley Kubrick.

What you see above is a clip from Kubrick’s 1968 masterpiece 2001: A Space Odyssey. In it, two astronauts dine while watching video content on a tablet that looks suspiciously like the iPad. There’s no real interaction with the tablet (suggesting this could just as easily some sort of portable TV), but since Apple is arguing that Samsung is trying to look as much like Apple as possible, it’s an argument that certainly proves Apple’s look wasn’t exactly original.

“In a clip from that film lasting about one minute, two astronauts are eating and at the same time using personal tablet computers,” wrote a lawyer representing Samsung. “The tablet disclosed in the clip has an overall rectangular shape with a dominant display screen, narrow borders, a predominately flat front surface, a flat back surface (which is evident because the tablets are lying flat on the table’s surface), and a thin form factor.”

As ridiculous as the argument may seem at first, could Samsung actually have a point? Certainly the tech inside the iPad is all Apple, but should a company really be able to hold a patent on a form that existed in some similar fashion in the past? Then again, if that form is a success and copying it could lead to a competitor’s success, why shouldn’t they have the right to protect it?

“It’s no coincidence that Samsung’s latest products look a lot like the iPhone and iPad,” stated a spokesperson from Apple in a prepared remark. “From the shape of the hardware to the user interface and even the packaging, this kind of blatant copying is wrong, and we need to protect our intellectual property when companies steal our ideas.”

Fighting patents based on inspiration drawn from movies, books, and television could become quite the slippery slope. How many cell phone patents could be defeated by arguing Gene Roddenberry invented it with Star Trek’s Communicator? Motorola’s Martin Cooper openly admits that it served as the inspiration for his invention of the cell phone – but should Captain Kirk’s walkie talkie render Cooper’s accomplishments null and void? Of course not.

Still – you can’t blame Samsung for grasping at any straw they can. After seeing select devices banned in both Europe and Australia as a result of Apple’s legal intervention, they’ve got to take any chance they can get.

[via The Wall Street Journal]

Gardens of Time heads to Atlantis for second premium chapter