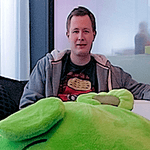 Rovio, the studio behind the enormously popular Angry Birds franchise, is flying higher than ever (and will in fact be taking Angry Birds beyond the stratosphere later this spring). But while it’s true that a merchandizing blitz has helped the Angry Birds explode out of the confines of the mobile games market, the fact remains that it seems as if Rovio is (ahem) putting all its eggs into one basket.

Maybe not for long, however. A recent interview that AllThingsD conducted with Rovio CEO Mikael Hed reveals that the company is currently putting together a game that’s not related to Angry Birds, and it should be out in “a couple months.” Hed also told AllThingsD that despite Rovio’s huge growth, its main priority is to produce games that are fun to play, period.

“Talking about ‘users; is totally wrong,” Hed said. “As long as you keep talking about users, you forget they are really human beings.”

Hed’s insistence that economics should never get in the way of a studio’s drive to produce fun games might be the reason why he’s in no rush to sell Rovio, despite frequent offers from wealthy suitors. Unsurprisingly, one of those interested callers is Zynga. Has there been words between the two game development giants?

“It’s clear that at one point or another we talk to everybody,” Hed said. He also admitted that Rovio is keeping its options open for possible acquisitions, but is cautious about the prospect. “It would be very easy for us to just go shopping. To get lasting benefit is the hard part.”

Rovio is also considering the possibility of publishing other developers’ titles. However you look at it, the company is in a good place, and has plenty of time to pick over its future options. For now, it has a more immediate concern: successfully rocketing its birds into space. Look for the next installment of Angry Birds on iOS, Android, Mac and PC on March 22.