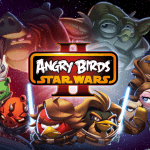 Remember just before the weekend, when we reported that Rovio had begun teasing a new Angry Birds game to be set in the Star Wars universe? Well today that news becomes official, as Rovio has pulled the covers off of Angry Birds Star Wars II, which is slated for release later on this year.

Based on the Star Wars prequel trilogy like many had assumed, Angry Birds Star Wars II will feature over 30 different playable characters: a number that well exceeds any Angry Birds game that came before it. You can see a few of these new characters and their respective powers in action in the game’s official launch trailer, although Rovio has made it clear that they will not be commenting on any rumors about whether or not Jar Jar Binx will make an appearance in the game.

But by and large, the most interesting feature we’ve seen so far about the upcoming Angry Birds Star Wars II is the introduction of “TelePods” from Hasbro, which involves the purchase of tiny Angry Birds toy figurines, and then transporting those characters into the game via a scanner, sort of like how it’s done with the Skylanders series.

Angry Birds Star Wars II will be launching worldwide across all app stores on September 19, and it seems the new line of TelePods will launch at a similar date, as the trailer tells us we can expect to find them “wherever toys are sold.” Will you be ready for the trip to the Dark Side this fall?